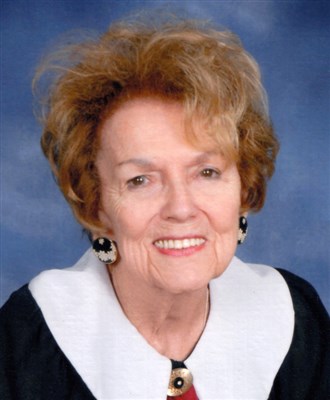 Janet Marie Eddinger Boor, 83, formerly of Emlenton, who served in ministry in the United Methodist Church for more than 50 years, went to be with the Lord Saturday morning, December 9, 2017, at her home in Myerstown.

She leaves a legacy of kindness, courage, laughter, love and beautiful memories.

Janet was born on January 27, 1934, in West Freedom, PA. She was a daughter of Roger Leslie and Lillian Emaline Phillips Eddinger. Janet grew up in the Foxburg and Fertigs areas and was a 1951 graduate of Cranberry High School.

As a United Methodist pastor's wife, Janet served in ministry in the Western Pennsylvania Annual Conference, from 1960 until the time of her husband's death in 2015. Together, they served the Shippenville Charge, pastoring the Shippenville, Manor and Providence United Methodist churches, Beechview UMC in Pittsburgh, Dayton UMC, Youngwood UMC, and Homestead Ave. UMC  in Johnstown.

Janet was a prolific artist, working in oils, pastels, charcoal and pencil. Her work has been on display in locations throughout PA.

In 2008, Janet published an autobiographical book, "Thy Will… Done," based on her life as a pastor's wife and keeping her faith while battling chronic illness.

Two children survive: Lisa Ann Plasan and her husband, Marco Hoos of Clarion, and John Carter Boor Jr. and his wife, Debra of Myerstown; three grandchildren, Allison Lynn Gerwick of Reedsville, Joseph Howard Plasan Jr. of Pittsburgh, and Rebecca Ann Plasan of Portland, ME; four great-grandchildren, Thad Christopher Gerwick, Brett Andrew Gerwick and Brayden Sunderland, all of Reedsville, and Damian Gabriel Plasan of Los Angeles, CA, as well as a number of nieces, nephews, brothers-in-law and cousins.
I
n addition to her parents and her husband, she was preceded in death by sisters, Donna Jean Hobson and Emma Lucy Seaman.

Memorial contributions may be made to the United Methodist Committee On Relief (UMCOR) by using the Donate button at www.umcor.org.  Arrangements are under the direction of Hile Funeral Home Inc., Emlenton. Condolences may be sent at hilefh.com.