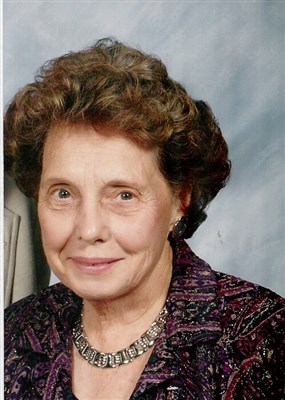 Rev. Audrey Dayen Baldwin, 87, a retired elder died peacefully on December 28, 2020, at Longwood at Oakmont after a long battle with Lewy body dementia.

Audrey, the daughter of the late Rev. David and Evelyn Dayen, grew up in Penn Hills. She graduated from Penn Hills High School in 1951 and taught elementary school there after earning a B.S. in Education from the University of Pittsburgh.

Audrey met Clarence J. Baldwin, Jr. through the Young Adult Fellowship of South Avenue United Methodist Church in 1955.  After they married in 1957, they raised their four children in Churchill and at South Avenue Church.

Audrey loved children. She was fun, loved to laugh, and enjoyed traveling with Clarence, her children, and grandchildren. They remember her as an incredible cook and baker, sampling her creations in process, then hosting large gatherings of family, friends, and Clarence’s Westinghouse customers from around the world.

She enjoyed teaching, reading, puzzles, watching mysteries, going on walks, and playing board games, badminton, and croquet with her loved ones. As a Girl Scout troop leader for 11 years, a camper, and an avid gardener, she encouraged appreciation for nature and the outdoors for her children and grandchildren.

Audrey loved God and God led her life. Just like her father, and later her sister, Audrey felt the calling for a second career as an ordained minister. After raising her children, she earned dual master’s degrees at Pittsburgh Theological Seminary (M.Div.), and the Christian Theological Seminary in Indianapolis (Masters of Sacred Theology in Pastoral Counseling). She became an ordained United Methodist minister and served churches in Murrysville, Fayette County, New Brighton, PA, and Winchester, IN. She especially loved pastoral care and counseling. She enjoyed writing sermons and could deliver them up to three times on a Sunday from memory.

She served the Western PA Conference as Director of the Licensing School and on the executive committee of the Board of Ordained Ministry as Registrar. She retired at age 70 to begin spending winters with Clarence in San Antonio, TX, his hometown. In 2013 they moved their winter quarters to Longwood at Oakmont.

A Memorial Service will be planned at a later date. Arrangements are entrusted to English Funeral Home & Cremation Services, Inc., 378 Maryland Ave., Oakmont, PA 15139. In lieu of flowers, donations in Audrey’s memory may be made to The Salvation Army, 700 N. Bell Ave., Carnegie, PA 15106.