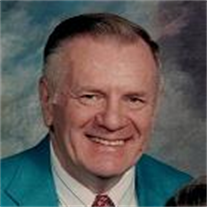 The Rev. Roger Arlo Applebee, 80, of Vanderbilt, who served as pastor of the Dawson Charge from 1995-2002, passed away peacefully Friday, August 26, 2016, in his home, with his loving wife of 43 years, Rhoda Lee Kinder Applebee, and family by his side.

The Rev. Applebee was called to be a minister, but few may know that he had done so much more.

He was born September 10, 1935, and was raised on a dairy farm in Erie County, a son of the late Arlo and Alma Curtis Applebee. He helped run the dairy farm and worked with his father in construction.

After leaving the farm, he worked as a clerk for the Pennsylvania Railroad. He also worked in bookkeeping and accounting for H.J. Heinz Co. in Pittsburgh, Four Seasons Camping Resort in Claysville and Boyle Land and Fuel in Fredericktown, to name a few.

The Rev. Applebee retired from Dawson UMC in 2002. He may have retired as a minister, but he did not retire as a pastor. He continued living and spreading the Word by filling in for vacationing ministers, performing ceremonies and leading a number of Bible studies.

An avid reader, especially of history, he loved to share and discuss things he learned.

In addition to his loving wife of 43 years, the Rev. Applebee will be sadly missed but fondly remembered by his children, Patricia Gregg of California, Erin (Bruno) Applebee-Ansell of Dawson, Lisa (John) Druga of Vanderbilt, Jan Applebee of Tennessee and Jeffery Applebee and Thomas (Kay) Applebee, both of Nebraska; his grandchildren, Ashley Gregg (Kevin) Kirby of Nightdale, N.C., Amy Gregg Manfredi of Sewickly, Joe, Gus and Zeb Druga of Vanderbilt and Jeffrey (Katie) Applebee and Douglas Applebee, both of Nebraska; his siblings, Robert (Shirley) Applebee of Wattsburg and Janet (Richard) King of North East; and many nieces and nephews.

Deceased, in addition to his parents, are a brother, Ronald Applebee, and a sister, Betty (Merle) Teed.

In lieu of flowers, the family suggested donations in the Rev. Applebee's memory to Phillip G. Cochran Memorial United Methodist Church at the above address, or to UPMC Cancer Center, 100 Woodlawn Avenue, Suite 300, Uniontown, PA 15401.

To leave a message or send condolences, visit www.brooksfuneralhonmes.com.