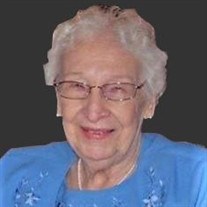 Mary E. "Betty" (George) Ammon, 95, was called home to our Lord Friday, Feb. 2, 2018, at Florida Hospital Altamonte Springs, after a short illness. She was the widow of the Rev. Jack Ammon.

Mrs. Ammon was born Feb. 7, 1922, in Donora, to Harry and Mary George, and graduated from Donora High School, along with Stan "the Man" Musial. She lived for 27 years in Deland, Fla., with her husband Jack, a United Methodist Church minister, who died in 2012.

The couple enjoyed nearly 70 years of marriage. Mrs. Ammon moved to the Longwood, Fla., home of her son and daughter-in-law (Jay and Diane Ammon) after her husband's death and then to her retirement home at Oakmonte Village in Lake Mary, Fla.

Mrs. Ammon supported her husband's ministry for more than 36 years at churches in Clarksburg, Germantown, Lewisburg and Dickerson, Md., and Cochranton, Erie, Freeport and Tarentum. She was a loving, kind and compassionate person who lived simply and honestly and who always put her family first.

Mrs. Ammon was a bookkeeper in the years before and after her child-raising days. Her last job was with Bankers Lithographing in Blawnox. She will be missed immensely.

The family suggests that in lieu of flowers, donations be made to the First United Methodist Church, 115 E. Howry Ave., Deland, FL 32724.

There will be a memorial fellowship in the Life Enrichment Center of the First United Methodist Church, led by Rev. Owen Stricklin, at noon Saturday, Feb. 10, 2018. Interment will be private. Arrangements will be handled by the ALLEN-SUMMERHILL FUNERAL HOME.
www.allensummerhillfuneralhome.com.