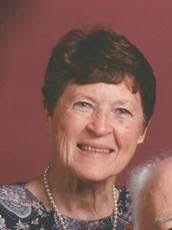 Doris Elaine (Ross) Adams of Clymer, NY, went home to be with her Lord on Thursday, December 31, 2015. She was the widow of the Rev. Leonard Adams, who served churches in the Erie EUB Conference, as well as in New York and other states.

Doris was born March 13, 1927, one of nine children born to the late Rev. Cecil and Anna (Madison) Ross, near Corry, PA. She married Rev. Adams on June 26, 1948, in Corry. He preceded her in death on January 22, 2011. She was also preceded in death by a sister, Kathleen Allen of Corry, and brothers Clifford Ross of Lebanon, Missouri, and Richard Ross of Corry.

She involved herself in innumerable church and community projects over the years, always supporting her husband in his ministry. Doris was a wonderful pianist, often playing hymns "by ear". She also had a beautiful voice and often sang duets with her husband during their church services. She always had a smile for everyone, and a sincere heart for doing God's work wherever she went.

In 1981, Leonard and Doris began a 13-month term of voluntary service in Brownsville, Texas, with the Mennonite Board of Missions. Leonard taught in the public school, and Doris taught preschool at the local Spanish-speaking Mennonite Church, Iglesia Menonita Del Cordero. Proceeds from their incomes were used to build and repair homes for the needy.

In 1984, Doris and Berta Mae Ives founded the Wee Care Christian Preschool at the United Methodist Church in North Clymer, NY. Doris held the position of teacher for many years. The preschool subsequently moved to the Abbe Reformed Church in Clymer, where it still operates today.

After her husband retired, they volunteered their services for 10 years working with the transportation department of Jungle Aviation and Radio Service (JAARS) in Waxhaw, N.C., a division of Wycliffe Bible Translators. Leonard drove a truck, picking up and delivering missionary supplies, and Doris prepared rooms in the Guest Lodge. Spitzer Funeral Home, 8728 E. Main St., Clymer.

The funeral service was held on Saturday January 9, 2016 at the Clymer United Methodist Church, with the Rev. Merle Showers, officiating.