Rev. Gerald W. Michel went to his glorious heavenly home early on February 24, 2015. Born on August 6, 1933 in Niagara Falls, New York, he was the son of the late Herbert L. and Elizabeth (Trotter) Michel. 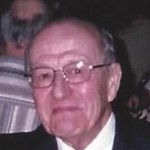 He was a retired clergy member of the Western Pennsylvania United Methodist Conference, and served the Greensboro/ Mapletown/Bobtown and Dunbar/Fairview/Franklin: Memorial charges as well as at Cranberry: Rockland UMC.

Online condolences may be sent to the family at www.alcornfuneralhome.com.