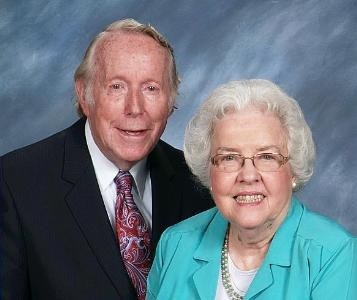 
Dr. Albright was born in Bluefield, WV on September 8, 1931. After graduating from Beaver High School in Bluefield, Pat attended Asbury
College in Wilmore, KY, returning to West Virginia to serve three small churches and to complete his college education at Marshall University. He earned  his Masters of Divinity Degree from Boston University School of Theology with honors, and did further study at Harvard, Oxford, and the University of
Salamanca in Spain. He was awarded a Doctor of Divinity by Allegheny College.

During eight years in New Castle, the church doubled in size, adding an education building. As an active civic leader there, he received the Jaycees' Young Man of the Year Award. During 14 years in Erie, the church established an inner-city nursery school and day care; built a 14-story apartment building for seniors and installed a new organ, dedicated in his honor. Dr. Albright continued to be active in civic organizations, serving on the Board of the Erie Foundation and was also very active in Rotary.

During his 16 years as pastor at Mt. Lebanon, the church prospered, adding a new parking lot and Weekday Ministries for children.

He served on the Board at West Virginia Wesleyan College and chaired the Board of Ordained Ministry of the Western PA Conference of the United Methodist Church.

Not content with retirement in 1994, he continued to serve churches in the area until his health failed several months ago, preaching his last sermon at Masonic Village in Sewickley on August 3, 2014 (he had preached there monthly). He served as interim pastor at Chippewa and Natrona Heights United Methodist Churches. He was interim Head of Staff at Westminster Presbyterian Church in Upper St. Clair and was on the staff at Southminster Presbyterian Church in Mt. Lebanon for several years providing pastoral care.

Much in demand as a guest preacher, he was asked to officiate at many weddings at Heinz Chapel and Old St. Luke's. His last wedding
was in May for his great niece, Liz Albright. While Preacher of the Week at Chautauqua he spoke to a congregation of 5000.

He was an adjunct Professor of Homiletics at Pittsburgh Theological Seminary where the Albright-Deering Lecture Series was established in his honor 13 years ago. Always a scholar, Pat endeavored to support education for others and was instrumental in establishing scholarships at West Virginia Wesleyan and one in honor of Bishop George and Carolyn Bashore at United Theological Seminary in Dayton, OH. As world travelers, Pat and Betty Lou visited 75 countries, mostly on study tours.

Pat's ministry was one of total dedication, not only to scholarship and exemplary preaching, but also one of serving his congregation through his presence with them for all of their needs. He loved people and was deeply loved in return, but most of all he loved Betty Lou, his wife of 61 years, with a love that knew no end.

No viewing hours were planned. Relatives and friends are invited to attend his memorial service at Mt. Lebanon United Methodist Church, on Saturday,  November 15 at 1 p.m.. The family will receive guests at the church following the service.
In lieu of flowers, memorials may be made to the Pat and Betty Lou Albright Fund for Missions at Mt. Lebanon United Methodist Church, 3319 W. Liberty Avenue, Pittsburgh, PA 15216.