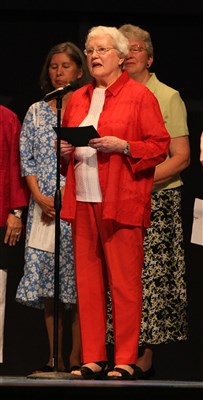 Sally grew up in Wilkinsburg, PA, graduating from Wilkinsburg High School then studied Nursing at Shadyside Hospital graduating in 1946. After graduation, she worked in the Operating Rooms at Shadyside Hospital. She met her soon to be husband at the marriage of her brother, Howard, who had met Mr. Ernst in the Navy. The two fell in love shortly thereafter and celebrated their 60th wedding anniversary this year with a reception thrown in their honor at Providence Point.

Sally was especially gifted as a teacher and taught 22 Schools of Christian Mission, traveling throughout the United States and the world. She was a guest and dignitary in many foreign countries in Africa, Asia, Europe and the USSR. Sally was very instrumental in developing The Nyadire United Methodist Mission that includes a school, nursing school, teachers college, orphanage and hospital in Nyadire, Zimbabwe. A link for the Nyadire United Methodist Mission is posted here: http://www.nyadire.org/index.htm.

Nothing was too big for Sally to tackle, whether locally, nationally or internationally. Where she saw people in need and in suffering she tried to pool her resources together to make things happen, and happen they did. She personally met with one of President G.H.W. Bush's top aides with 10,000 postcards from around the country to persuade him to sign into law a bill for $3.2 billion for aid to the world's children. It was a bill the President was not going to sign. However, with support of Sally Ernst, and other like-minded people the bill was passed.

Sally was a delegate to the six United Methodist General Conferences, held every four years for elected laity and clergy representatives from across the globe to conduct official business and make policy for the denomination.