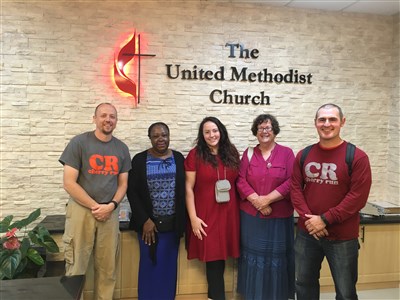 This summer five people from Western Pennsylvania trusted God and took a leap of faith by traveling 8,000 miles to a land unknown. The Zimbabwe Immersion Program (ZIP) is an opportunity for people in Western PA (WPA) to witness life, church and culture -- and build relationships -- through the partnership between the two Episcopal Areas.

Zimbabwe recently has been a country in turmoil with a failing economy, an unemployment rate of almost 90%, cash shortages, and unpaid civil servants. Yet if you spend time with people in Zimbabwe, you may not suspect such severe circumstances. You witness the joy and love the people have for the Lord and the faith that all will be well if they only trust in God.

Over the past six years, the Zimbabwe Partnership has taken more than 10 groups to Zimbabwe through the Immersion Program, Lay Academy, Zim Camp and District-to-District partnerships. What stands out the most during all of the trips is the relationship-building.

As the partnership has grown, we have seen leaders emerge from among our  participants. Some have been blessed with an opportunity to return to Zimbabwe as mentors for our youth, as chaperones or as conference representatives teaching at the lay academy.


For I know the plans I have for you, declares the Lord, plans for welfare and not for evil, to give you a future and a hope. -- Jeremiah 29:11

One thing we’ve learned for sure is that we never know what God has planned for our future.

For example, the Rev. Renee Mikell, pastor of West View UMC, the thought of ever going to Zimbabwe was very far-fetched.
Rev. Mikell said she had a full-circle experience while in Zimbabwe as a ZIP participant. In 2013, Bishop Eben Nhiwatiwa of Zimbabwe visited Western Pennsylvania with a group of his leaders and joined with Bishop Thomas Bickerton in ordaining Mikell.

In Zimbabwe, attending several building dedications, funerals, and ground-breaking events along with Bishop Nhiwatiwa and members of his cabinet, she was reminded of the importance of our human encounters with each other.

“We should never take them for granted because God has a way of allowing them to enrich our ministry and our lives in unexpected ways,” she said. “I realize today that I was blessed with a full-circle encounter that is now a very memorable part of my life experience. I’m grateful to the Zimbabwe Immersion Program and our Chabadza Covenant for making it possible.”

Things in life might not go our way; But we need to be grateful and feel blessed to be given a new day and opportunity to do God’s work. There is a season to everything and we need to have Faith and put our Trust in God in all we do.

Bob Hixon, a leader of Blairsville’s new Connect Church, joined his pastor, the Rev. Brett Dinger, on a mini-Immersion program this year. His faith was tested, even before the trip started.  Here's Bob's story:

A Test of Faith
When I was selected to go to Zimbabwe in early 2016, I was filled with excitement and nervous anticipation. Questions quickly and repeatedly ran through my mind regarding my ability. I doubted my biblical knowledge, I doubted my ability to communicate, and I wondered if the right person was selected.  So I took steps to remedy the situation by studying.

I began by setting aside some time each day to learn some Shona words. I also increased my bible reading – specifically focusing on Paul’s letters. I started to feel better about my situation, but still felt something was missing.

On April 18, my wife Crysta was admitted to the hospital for the first of four admissions that resulted in her living in the hospital more days than she was in our home. Due to the new tempo that was established with my daily tasks, I set aside my study of Shona and my daily scriptural readings.

I was focused on my family and now beginning to wonder if the circumstances were a sign that I needed to stay home and back out of the Zimbabwe trip.  I continued to pray for my wife’s healing and her situation and I would occasionally ask God if He was giving me signs to back out, to stay home and care for my family. I was worried that something could go wrong while I was halfway around the world.

Early in the morning on June 9, while my wife was once again an in-patient (her sixth day of this particular admission), I prayed in my car as I traveled to Harrisburg. As before, I prayed for Crysta’s healing and for my discernment regarding the Zimbabwe trip. What was different this morning was that I prayed for God to help me see what I was meant to see in this situation.

It was as if the music that was playing on the Christian music station was speaking to me for the next several songs. Songs Like “Help Me Find It” (Sidewalk Profits), “You Never Let Go” (Matt Redman), and others were to me a message from God with instructions to trust in Him and to have faith.

From that point forward I was able to give my trust for the Zimbabwe trip to God and I recognized what I had been missing when I started my preparation. Prayer, intentional and specific prayer that was not asking God to solve my problems, but asking God to help me see my way through the fog, asking for clarity in the situation and not necessarily resolution.

Crysta was discharged from the hospital for the final time on June 15, we left for Zimbabwe on June 27 and she had no health emergencies while we were away.

The Zimbabwe journey began for me well before we left for the airport. For me, this trip was a leap of faith, lifting all of my concerns to God and trusting in Him to care for them.  Thank- you Jesus. Tinotenda Jesu!