Zimbabwe: "A Place of Joy" 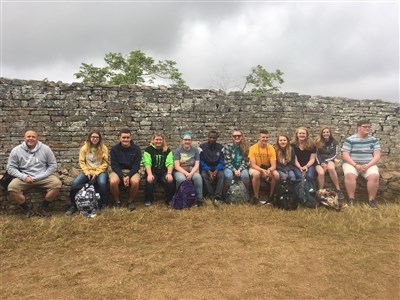 “Zimbabwe is a place of pure joy,” said Andrew Gross, 17, of First UMC in Union City, who traveled to the African nation last summer with nine other Western PA Conference youth for 2017 Zim Camp.

“While the people we met may not have physical things such as money and other things, they have something greater. They have a burning passion for the Lord. They have such joy in worship and when they sing they sing with their hearts,” Andrew, a high school senior, explained. “Everywhere we went they gave us food. These people who had so little fed us. That was amazing to see and experience.”

Zim Camp is an opportunity for youth to spend time getting to know youth in Zimbabwe through fellowship and working together on some of the district-to-district projects launched as part of WPAUMC’s Partnership with the Zimbabwe Episcopal Area. 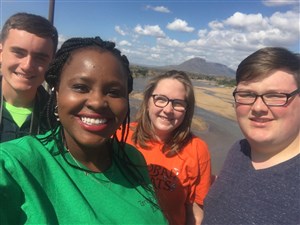 This year, the Zim Camp youth and four adult leaders--the Revs. Greg Cox, Kelly Schanley, and Keith Kaufold, and Zimbabwe Partnership Coordinator Sandra Matoushaya--traveled to southern districts of Zimbabwe. They visited Great Zimbabwe, learned about the history of the country, and saw two projects underway through partnership with the Kane District. During those visits, four youth from Masvingo District traveled with the WPAUMC youth. They bonded on and off the bus, played soccer, volleyball and netball and worshipped together.

Cassidy Burke, 17, of First UMC in St. Marys in the Kane District, presented a gift from her church as a symbol of Chabadza, and received a gift for her church from the people of Chipfunde UMC.

The group also visited Bikita UMC, which was completed in the spirit of Chabadza with the Kane District. Rev. Keith Kaufold, a Pittsburgh District pastor who served as one of the adult leaders for Zim Camp, had the opportunity to preach there.  During afternoon fellowship time with the people of the church, some of the WPA youth were able to pump water from one of the bush pumps. 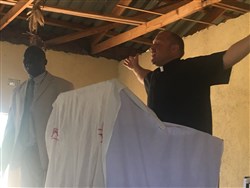 “One particularly memorable thing I heard was when Pastor Faith of the Bikita Circuit said, ‘We are constantly amazed by the ways in which God blesses us,’” said Ben Raygor of Somerset Grace UMC.  “To see the overwhelmingly grateful disposition of the people of Bikita, who have so little, was remarkable.”

In addition to churches, the Partnership supports clinics and hospitals. Zim Camp youth visited both the Bikita Clinic and Mutambara Mission Hospital.  Although very different from hospitals in the United States, youth learned how Zimbabweans treat patient needs in remote locations and with very few resources.

“Seeing these United Methodist institutions that serve the people, we can see the connectionalism that exists within the United Methodist church, the impact of missions worldwide and the work of God at hand,” said Sandra Matoushaya, Partnership coordinator.

At the end of Zim Camp, youth from Western PA and Zimbabwe celebrated at a farewell dinner. The relationships they built were the most meaningful for several of the youth and some still communicate via social media like Whatsapp.

“Meeting Zimbabweans and comparing life in America with life in Zimbabwe was very interesting and eye opening to the sometimes very easy, pampered lifestyle we as Americans have,” said Ben Raygor. “In particular, the conversations I had with Zimbabweans my age were especially meaningful because we were able to talk about our lives as teenagers and the hardships we endure. Some were very different, but some were surprisingly alike.”

Andrew Gross summed the experience up this way: “I could go on and on about my time in Zimbabwe. While we did give them some money, what they gave me was something I can`t repay. They gave me hope, a burning passion for God, and they taught me to be thankful for the things I have and trust that God will provide what I need.”