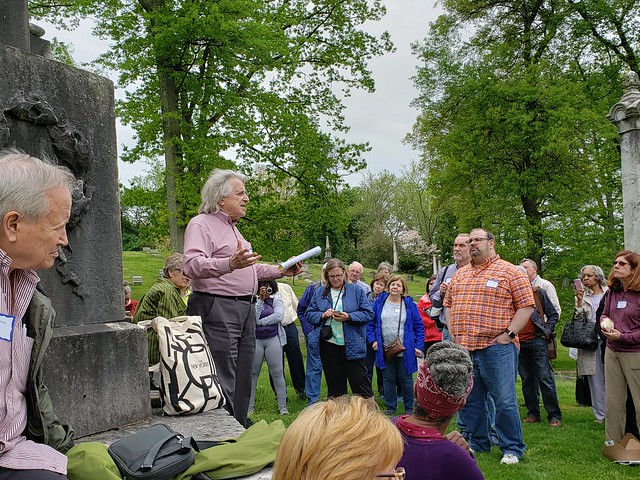 The Wrestling with Racism group, which was launched by Pittsburgh's Warren and First United Methodist churches, sponsored an Abolitionist Tour of the Pittsburgh area on Saturday, May 4. Historian/storyteller John Burt provided the commentary on people and places while the packed tour bus traveled from Pittsburgh to Washington, PA and back again.

The focus was on antislavery efforts of women and men in Western Pennsylvania before the Civil War and included stories of how the Underground Railroad operated in the area.

The first stop was LeMoyne House in Washington, one of several sites in Washington County on the Underground Railroad. Dr. Francis Julius LeMoyne, a physician, was active in the anti-slavery movement, not only providing safe shelter, but assisting many escaping slaves financially or through his connections.

Nelson Gant, for example, spent several days at Dr. LeMoyne's home and told the LeMoynes about his efforts to buy his wife Anna Maria's freedom. Dr. LeMoyne put him in touch with Dr. Martin Delany of Pittsburgh, who had apprenticed with Dr. LeMoyne and later went on to serve the with the "U.S. Colored Troops" in the Civil War. With the help of Dr. Delany and others in Pittsburgh,  Gant worked to earn enough to gain his wife's freedom, but when her owner refused to sell, Gant attempted to help her escape. Although they were caught and jailed, they were later acquitted and and Anna Maria's freedom was secured. The cost of their trial and her freedom was $775, much of which came from Drs. LeMoyne and Gant and other friends. The Gants eventually settled in Zanesville, Ohio, and built a home where they helped others on the Underground Railroad.

The Abolitionist Tour bus then drove along the North Side of Pittsburgh and across the river to Allegheny Cemetery in the Lawrenceville section to visit the sculpted grave marker of Charles Avery. Avery was a Methodist minister, industrialist and philanthropist who made his fortune in cotton milling and lived in Allegheny City, now the North Side of Pittsburgh. He founded and incorporated the Allegheny Institute and Mission Church, later Avery College, intended for the formal education of Blacks, in 1849.  The Institute building, also a stop on the Underground Railroad, survived on Ohio Street in the heart of the Northside's  Deutschtown neighborhood until it was demolished in 1969-70 to make way for Interstate 279.

In downtown Pittsburgh, the tour stopped at First Ave. and Smithfield Street near the former Monongahela Hotel and John Vashon's barbershop and safehouse, where slaves could change their appearance and a continue on the path to freedom.  By one account, the hotel was by day a business, social and political gathering place for white leaders, by night it was a station on the Underground Railroad. The hotel staff of free blacks reportedly assisted many slaves escape from their masters staying there.

At the Heinz 57 Center on Sixth Street, the bus stopped near one of two historical markers in the region dedicated to Jane Grey Cannon Swisshelm, who witnessed slavery first hand while living in Kentucky and pledged to work to abolish it. Swisshelm, incensed by laws making women the property of their husbands and restricting their act without permission, also played a key role in the suffragette movement. She became a journalist, first writing under a pen name to tell some of the stories of oppression, then publishing an abolitionist newspaper in Pittsburgh.

The tour brought together a diverse group, including some from other denominations and faith communities, to learn about the region and spend time together.