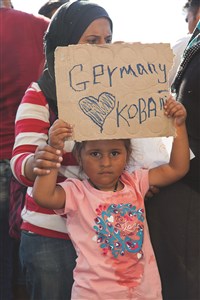 UPDATE: Western Pennsylvania United Methodists contributed more than $15,000 to a special appeal by the WPAUMC-East German Partnership Committee to assist congregations in Eastern Germany who are helping refugees.

"The gifts will help our churches there conduct cultural, language and work programs to assist the refugees, who are from many places in the Middle East," said Mary Garber of Mt. Lebanon UMC, co-chair of the WPAUMC Partnership committee. Garber said she will travel to her congregation's sister church in Zwickau in mid-March.

The current migration of refugees from the Syria and other nations into Europe is the world's largest refugee crisis since World War II, and Germany has set the bar for receiving and adopting people into a new homeland there. United Methodists in Germany are reaching out directly, as well as in cooperation with ecumenical and national relief efforts.

East German churches, which still have economic challenges from their time behind the Iron Curtain, are opening doors and assisting with ministries of cultural adjustment help, medical care, clothing, food, and more.

Because of Western Pennsylvania’s long-time partnership with the United Methodist Church in eastern Germany, United Methodists here have a unique, once-in-a-lifetime opportunity to support partners who are working directly with the refugees. Western PA congregations were asked to receive a special offering in November or December to help the effort.  See a flyer.

Among those working directly with the refugees in their communities are pastors and members of UM churches in Dresden, Chemnitz, Leipzig, and Zwickau. 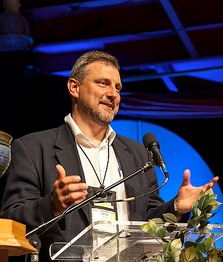 Rev. Werner Phillip of Dresden, shown at left at the 2014 Western PA Annual Conference, said a camp two blocks from his church is set up to house children, many of whom have arrived in Germany without parents or caregivers. They are receiving clothing, shelter, food, and school supplies to begin their new life.

The situation was similar in Zwickau. In a German UM Conference blog post, Rev. Lutz Breuckner described receiving emails the last weekend of September from Mt. Lebanon UMC, which has a direct partnership with the Zwickau church, asking if and how they could help with ministry to the refugees. The same day he checked Facebook messages and saw a plea from a volunteer at the Zwickau refugee facility asking for help setting up a room for children. "I saw it as a commission from God," he wrote. He contacted the partners at Mt. Lebanon and they immediately donated money to help.

Brueckner visited the facility, a gymnasium where refugees stay before they are registered and processed. "So many people in a confined space without any privacy - families with children, teenagers, young men, some elderly, nursing mothers, pregnant women," he wrote. There was only a picnic-type table and some cardboard boxes. No toys.

After purchasing materials, he reported to Mt. Lebanon UMC,  he and six members of his congregation went to the facility in early October and set up a children’s room.

“Some refugees helped us during unloading of the car,” he said in an email to Mary Garber of Mt. Lebanon UMC. “A refugee from Syria helped us to build shelves and the other things.

“For the children it was a feast. I have assembled together with them the small tables and chairs. That was exciting! They do not speak German…Then came a 12-year-old girl from Syria. She spoke an excellent English. She helped me with the translation.”

When the job was completed, he said, “The children's eyes were shining. And very quickly they have taken (possession of) their new children's playroom.

“One picture has remained in my memory,” he added.  “A little girl from Syria with black hair was sitting on the little chair. She was sitting there more than one hour. And she said not a single word. Behind her the wall - so she could see everything.” What had she experienced during her flight, he wondered.

The Global Ministries partnerships team last week approved a request from Western PA-East German Partnership leaders to ask congregations to receive special offerings in support of our partners in Germany.

I have been involved personally in the East German partnership since its inception more than 25 years ago. I've enjoyed and been passionate about the cultural exchanges, the mission trips that we've shared in other venues, and all kinds of really fruitful ministries that have come.  But this is probably one of the greatest humanitarian crises and opportunities for Christian ministry in our lifetime and Christians need urgently to respond. The partnership we have with the Eastern Germans puts us in a unique position to make a huge difference in this enterprise.


Funds will be channeled through a world mission fund in the East German Annual Conference in cooperation with the UMCOR response in Europe, Jordan, and other areas.

Special offering funds and other donations can be sent to the WPAUMC Treasurer's office designated for the WPAUMC-East German Partnership  (WPA Advance #SS003500E).

In this video by the Rev. Paul Jeffries, a Global Ministries missionary, Rolf Held, a United Methodist in Messtetten, in southern Germany, talks about ministry with the refugees now living in that community.

UMCOR has provided more than $2.4 million in emergency aid for people impacted by the crises in Syria and Iraq, and it continues to support partners in meeting ongoing needs of refugees through its Global Refugee Migration Advance #3022144.
News