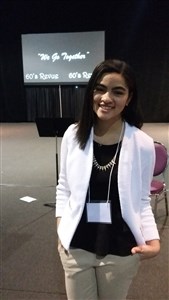 Denise Nicole Stone, a college student who has been attending United Methodist Women gatherings for her entire life, has been elected to the Board of Directors of the 800,000-member women’s mission organization. At age 19, she will be the youngest member of the newly structured 25-member national board.

In a sense, Denise’s election demonstrates the success of one of organization’s area of emphasis: to equip and involve young women in leadership at all levels.

“I am honored to have been elected,” Denise said. “I am so young and I came up through United Methodist Women, but for them to vote for me and say that they trust me with their organization is incredible!”

Since she was elected at the Northeast Jurisdiction UMW gathering on June 17, Denise said other women on the board and in the organization have reached out to her in many ways. “I’ve felt so much love and support,” she said.

A member of Greenstone UMC in the Pittsburgh District, Denise will begin her sophomore year at Boston University this fall. She’s majoring in international relations.

Denise’s mother, Peggy Ward, enrolled her in Western Pennsylvania's first Children’s School of Mission (now Mission u) when she was 5. “Ruth Higginbotham was my deal and it was a very cool experience – Ruth was awesome and making friends was awesome. That’s why I went back every year,” Denise said.

“With the studies each year, you’re seeing more of the world than if you’re sitting at home. And you get a chance to work for justice—raising money to help people. It’s a pretty amazing thing. All of the women would look out for us. They taught me to sew one year.  We made clothes for Dress Our People – and I went back and helped to start that at our church.

Her experiences at School of Mission, which later became Mission u, “shaped a lot of how I see the world,” Denise said. “It has colored a lot of my life. It’s very clear that age is not a barrier to helping to change things.”

At that first School of Mission, Denise met Devan Jewitt, who was 6 and they remain friends today. In 2012, the Conference UMW sent Denise and Devan to Limitless, a national women’s event at Duke University. They learned about what UMW does to help people around the world and got new resources that would help them come back to Western PA to create their own event for young women. In the summer of 2014, after about a year of planning, the first Unstoppable was held as a weekend event running concurrent with the weekend School of Mission.

“It was modeled loosely after Limitless. It included learning and outreach-based activities,” Denise said.

Over the years, Denise has also attended UMW Assemblies and participated in mission trips, including the 2015 Mission of Peace to India and a Conference Volunteers in Mission trip to Costa Rica.

This summer, she’s serving as a Western Pennsylvania Conference Regional Mission Volunteer along with Natalia Berkey, a sophomore at Asbury College. The two first met as voting members of the annual conference and got to know each other better as part of the Conference’s Ebenezer youth team to Zimbabwe in 2014.

So incredibly thankful to each and every person who has cared for me, nurtured, and encouraged me. For every single person who helped me to grow, walked this path with me and modeled discipleship. I owe so much of who I am to you guys, I wish I could tag you all but you know who you are. I have no words for the outpouring of love and grace, the hugs and pictures that I have experienced today except thank you. I love my United Methodist Women and I'm so excited to see where God takes me and this fantastic organization!


Read more about Denise and Unstoppable on the Conference UMW blog.
News