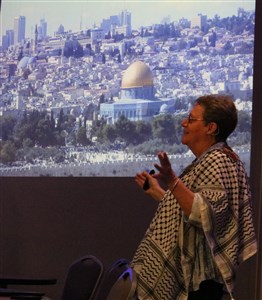 Tina Whitehead, who has served as a volunteer Conference missionary in the Holy Land for several months each year since 2006, is back in Western Pennsylvania after experiencing difficulties entering Israel.

Whitehead, who has shared her experiences in classes at Mission u, the Annual Conference Lay Academy, and at the University of Pittsburgh and Carnegie-Mellon University Osher Institute programs, sent the following note to those from the Conference who have supported her missionary efforts.

Here I am, back in Western Pennsylvania.  I guess it was inevitable that at some point I would have problems entering Israel.  Actually, I’m surprised it hadn’t happened before this.  After all, twelve years is a substantial time, and certainly when I began this journey in 2006 I could not have imagined that I would still be doing this work.  But God’s call has not diminished over this time, and my passion for advocacy on behalf of the Palestinian people has only intensified.

So, what happened?  Well, contrary to what you might think, I was not denied entry because of my work with the Palestinian people.  That’s not something I speak about when questioned as to the reason for my stays.  I was “flagged” because last year I spent more time in Israel than in the U.S., eight months total.  I was legal, having been given visas on three different occasions, but the amount of time and the frequency of my trips, lead them to question my reasons for being there.  And, as was pointed out after numerous interviews, “You’re obviously not a tourist, so we will no longer allow you to enter on a tourist (3 month) visa.”

I am actually very thankful that I was given one week upon entry at Ben Gurion Airport.  I was told that the powers that be wanted to deport me immediately.  That one week time gave me opportunity to connect with friends, meet with tour groups and have a sense of closure, at least for this part of my journey.  I have every intention of returning, but also know that God sometimes has other plans!  I look forward to finding out what they might be.

The one week actually ended up being two weeks as I continued to appeal their decision.  During that time I was overwhelmed by the support of friends from, quite literally, around the world.  And, of course, the warmth and welcoming of the Palestinian people continued to nurture me.  I made contacts from New York to Texas with possibilities of some speaking opportunities while back in the States.  And I was offered a part time position in the local library on returning, which I start this week.

Years ago, I had a very profound experience of God’s care, and at many times throughout the past forty years, I have been reminded of God’s promise, “Didn’t I tell you that I would take care of you?”  These past two weeks have shown evidence after evidence of that promise.  I’ve been overwhelmed at times by a sense of God’s providential care.

I thank you for your support throughout these years and ask for your prayers as I continue to discern where God is leading.  And, if you’re in need of a program or speaker, please keep me in mind!