Wanted: The Strong and Courageous 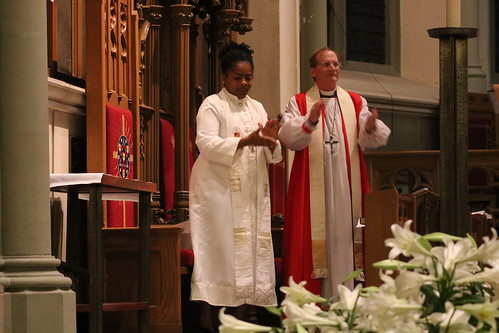 At a service honoring the Rev. Martin Luther King Jr. on the 50th anniversary of his assassination, Bishop Cynthia Moore-Koikoi said that strong and courageous leaders like Dr. King are needed today to usher God’s people into the promised land.

“It has been 50 years and we are still dreaming about the promise,” she said. “We are still dreaming and hoping for - we are still crying about and yearning for, we are still protesting about and working for the promise. The promise as articulated by Dr. King -  'that all men, yes, black men as well as white men, would be guaranteed the unalienable rights of life, liberty, and the pursuit of happiness.'  It has been 50 years, and while some progress has been made, the dreams my parents and grandparents had 50 years ago are not yet my reality. Some progress has been made, but we are not yet satisfied.”

Preaching at Trinity Cathedral in downtown Pittsburgh at an ecumenical service in which several religious  leaders and Pittsburgh Mayor Bill Peduto participated, the Bishop drew parallels between conditions for people of color 50 years ago and today.

“Fifty years ago vigilantes tried and convicted black boys and black men and lynched them for alleged crimes. Today police officers and self-appointed vigilantes try and convict black boys, black women, and black men and shoot them for the alleged crimes of breaking a car window, driving with a broken tail light, selling small quantities of marijuana, or being in the wrong neighborhood while eating some skittles and drinking some iced tea.  These unarmed persons, simply because of their blackness, were so threatening to armed police officers and neighborhood patrols, that they were executed on the spot,” she said.  “Make no mistake, these shootings are modern-day public lynchings.  So while some progress has been made no, no we are not satisfied.

“Today our schools, particularly in the Pittsburgh area, are just as segregated as they were before Brown versus the Board of Education,” she said. “Segregation is alive and well, and in the case of private versus public schools, separate continues not to be equal.” 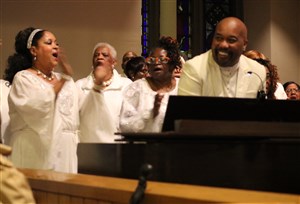 Churches, she added “are more segregated than even our schools.”

“Racism has infiltrated our economic and political and education systems.  Racism has set up shop in our churches,” Bishop Moore-Koikoi said. “We need some people with courage who can stand up to people in positions in power, people who pay their salaries, structures from which they have benefited.”

Because “we have been wandering in this wilderness for quite some time,” the Bishop said. “I must confess that I have from time to time joined in the murmuring and complaining.  I have wondered if God is still with us.”

But she said she has heard about and met courageous leaders -- adults and students -- who have taken stands to address racism. This convinces her that “God is still calling the strong and courageous who will not give up on the promise …who will not be discouraged or deterred by our current realities, but rather who will speak with power and conviction to the forces of the evils of racism in whatever forms they present themselves and wherever they present themselves, from the school house to the jail house to the White House."

“I believe God is still calling the strong and courageous who really believe that God’s power is stronger than racism and institutions, and systems, and ignorance, and fear, and stupidity,” the Bishop said. “I believe God is calling the strong and courageous who are willing to be agitators and navigators, visionaries and prophets, warriors and mediators.”

Saying that not everyone is called to this ministry, Bishop Moore-Koikoi asked those who may feel something rise up in them: