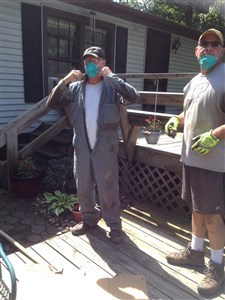 Jerry Sietz, left, of Blairsville and Tony Brunetta of Indiana prepare to crawl under a trailer in the Connellsville area.
6/26/2017

First came the flood, than came the volunteers. Both were life-changing for Connellsville residents hit by a devastating storm ten months ago. The good news is that volunteers are still coming.

“If you've never seen a flood, you have no idea,” said John Allen, 62, of Breakneck Road. He rushed home to beat the storm as three wind systems converged overhead and vividly remembers what he saw: “There was a hole in the sky, it was weird looking, spooky!”

Five inches of rain fell in the next two hours over an eight-mile radius.

“In my lifetime I've seen five or six floods, but never anything like this. It was unreal, like a bomb exploded – but no one died,” he said, shaking his head.

On a recent Saturday volunteers from Latrobe UMC and Indiana Grace UMC performed home repairs for flood victims, including for Mr. Allen. Hundreds of teams have preceded them.

Mr, King, 73, left his property to avoid an asthma attack from the dust stirred by their work - he said his lungs were burned out in a silo fire 15 years ago. Despite this, wearing portable oxygen he daily trudges up stairs to his second floor where lives as repairs continue.

Beth Blair, Disaster Case Manager, said it was awhile before Mr. King applied for relief – he didn't know it was available at first and then he hesitated to ask for help until encouraged by a neighbor.

“He finally showed up one day. We can only help those who come to us and file a case,” she explained.

Mr. King said the raging flood washed away his 6,000-pound iron bridge, his only access across a stream to his house. For nine months he walked across a wooden foot bridge. He said a neighbor lady set out chairs for him  -spacing them so he could stop and rest- or he would never have made it the few hundred feet to his front door.

The recovery office provided a sturdy new arched cement bridge for Mr. King. He can now drive close to his house but sometimes worries about getting across it in the winter after being accustomed to a flat one for the 40-plus years.
Volunteer Coordinator Roberta Perbonish of Jacob's Creek UMC in Scottsdale said about seven bridges were replaced for residents who otherwise lacked access for emergency medical personnel. A press release stated the bridges totaled over $170,000.

Amy Price, Recovery Center Coordinator, estimates over 300 teams have volunteered since last August. Some came on their own, others through the Red Cross and many from churches – Baptist, Church of Christ, Catholic, Salvation Army, United Methodist and others.

The flood recovery effort is a WPA Conference UMCOR project.

UMCOR – the United Methodist Committee on Relief-  has been instrumental in organizing and directing relief efforts, however in the beginning few knew what UMCOR represented or the scope of services the agency provides.

“To be honest, I didn't know what UMCOR meant when I first heard it. What it means to me now is people literally being the hands and feet of Christ, ministering to people in the places where they need it most,” Price said.

“Without UMCOR providing the process and model to utilize all this resource and funding, I do not believe recovery would be possible. They have given us the ability to assist flood survivors with a  proven method worldwide, in addition to providing grace,” Price said.

Perbonish said a very small percentage of home owners had insurance that covered any of their costs related to the flood. The recovery center has addressed 154 cases. Originally 307 homes experienced some degree of damage, from a trickle in the basement to total destruction.

Price said she's not sure people realize the huge catalyst volunteer efforts provide to individuals and to the community. Most of these people couldn't afford to pay somebody to do repairs and lacked expertise to do the work themselves, with labor costs one of the biggest expenses they faced.

Volunteers have not only enabled people to live in their home, but also encouraged them with human kindness, she said.

Another Indiana Grace team led by Perbonish ripped skirting off John Allen's trailer. Then, wearing masks, they crawled under it to pull out damp moldy insulation.

Mr. Allen said when the storm hit the culvert under the road in front of his house for White's Run quickly clogged with debris, causing the creek to overflow.

A VietNam vet who is disabled following multiple surgeries, Mr. Allen said it was unbelievable how easily the force of water ripped up eight to ten inches of cement road, flooding his yard and under his trailer. He knew people – and cats – who clung to trees during the storm.

He appreciates everyone who helped his neighbors and himself get back on their feet.

“Everyone's been great,” he said adding with a laugh, “The Salvation Army always wanted to feed you more than you could eat.”

Price said in addition to the volunteers, many businesses, churches, agencies, and individuals have made tremendous financial and other donations that have made flood relief possible.

There were 46 active cases to go, said Price, who expects the recovery effort to be completed by the end of the year. She can be reached at  amy.price@WPAUMC.ORG or 724 984 3278.

Volunteers can register at www.connellsvillevolunteers.org, by email to volunteer@wpaumc.org. Donate through the Conference Disaster Response - Advance Special #DR0000911. Gifts can be made online at wpaumc.org/online payments or sent to the Conference Treasurer's office at 1204 Freedom Rd., PO Box 5002, Cranberry Twp., PA 16066-0002.