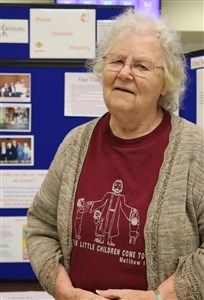 Nearly every Tuesday evening, 87-year-old Marie Stumpf leaves her home and drives about seven miles to the State Correctional Institution at Pine Grove to see her "guys." For 11 years, she has taught Disciple Bible study classes for small groups of male prisoners. More importantly, she said, she offers them love, letting them know that she cares about them.

Some of her guys call her “Miss Marie,” others call her “Grandma.” But Marie points out that her own grandchildren are "older than most of them.”

Her ministry grew out of the loss of a son she and her husband adopted many years ago in Maine. He struggled, was in and out of prison three times, and died at age 45, Marie said. She volunteered with the Western Pennsylvania Conference’s Prison Outreach Ministry (WPAPOM) because, she explained, “I always wanted to minister to some other mother’s son.”

Marie’s group at SCI Pine Grove recently finished Disciple IV. In her next session, they'll use the first Disciple study. “None of them have been there long enough to have gone through all of it,” she said.

There are six to eight men in Marie's current group, but sometimes 12 or 15 have participated. In the 11 years she has volunteered at the prison, hundreds of men have been in her study groups.

“We usually read scripture and I read from the book. Many of them memorize the scriptures,” she said. “It’s so rewarding to know them when they come in, and then to see God’s working in their lives. I tell them ‘somebody out there is praying for you.’ I can see a change.”

In fact, many United Methodists are praying for them as well as others served by Prison Outreach Ministry volunteers. Randy Datsko, the missionary director of WPAPOM, recently talked about the transformative power of prayer at a recent board meeting of the ministry.  Men at the Loretto Federal Correctional Institution’s minimum security satellite camp, where Datsko leads worship, have started to ask for prayer during their worship services and to share instances when they have received answers to prayer.

“One man said that after prayer by the group his wife who was struggling found a job that was able to meet her family’s needs. Another man facing surgery was very fearful, but found help through the prayers of others. Another man who came to faith in Christ while in prison applied for clemency and received it from President Obama and was released five years early. Praying for others and sharing results has built Christian community,” according to a report in the group's Summer 2017 newsletter.

The Prison Outreach Ministry has volunteers in several state, federal or county facilities. Prayer and financial support comes from local churches and individuals.

Marie, a longtime board member of the ministry, is one of six WPAPOM volunteers at SCI Pine Grove.  Others are the Rev. Katrina Laude, Sharon Tunzo, Tom Trunzo, Jeanne Hilliard and Doug Hilliard from Homer City UMC. Their ministry includes a Monday night Bible Study with 20 participants, a worship service with an average of 40 attending, and a Hispanic worship service with about 35.

At Loretto, Ruth Makin and Andy Jones help lead at the camp (7-10 attend). They are working on a study by Max Lucado on the Gospel of Luke.  Kevin Stock leads a Bible study at the main Loretto facility, and the Rev. Dave Bunnell, a retired elder, teaches the Threshold Program at the camp and may do the same at the main facility this fall.

Bill Cadigan goes into SCI Forest and sees between 12 and 15 each week for their Disciple III Bible study. They have just completed Disciple II.

Chris Cole is at FPC McKean where 12 have just completed a DVD study of “The Harbinger.” Earlier in the year, their study was on the DVD of “Not A Fan”.

Rev. Gary Sheesley, pastor of White Chapel and Balm UMCs, volunteers at SCI Mercer, joining a group of four from Butler who conduct a Bible Study and worship service with 80 in attendance each week.

The Rev. Dr. David Stains, pastor of Beulah UMC in Johnstown, volunteers at SCI Somerset leading a Justo Gonzalez Tres Meses Bible Study of Isaiah with 25. He also leads a Spanish worship service there. Mary Lou Ickes began a Wednesday night Bible study with 40 in attendance from the Hispanic community. She also leads a study at SCI Laurel Highlands.

In addition, Dr. Stains leads a Spanish worship service with about 25 attending at SCI Pine Grove with Ron Gritzer and other volunteers.

A long-time Prison Outreach Ministry volunteer who has served in prisons wherever he has been appointed, Dr. Stains and the late Dorie Heckman translated the Disciple I Bible Study into Spanish with the permission of its author, the Bishop Richard Wilke.  In addition to his prison ministry, Stains produces Hispanic worship services for Atlantic Broadband on channel 9 in the Johnstown Altoona area.