Donations from Imagine No Malaria to the Global Fund to Fight AIDS, Tuberculosis and Malaria in 2015 were more than double that of combined donations in the previous four years, according to the annual report issued by the Global Fund to The United Methodist Church.

That’s thanks to the generosity of United Methodists. According to the report, The United Methodist Church is one of the most significant non-government donors to the Global Fund and is unique within the global community of faith-based organizations.

“Today on World Malaria Day, we are thankful for the headway that’s been made against this deadly disease and we reaffirm our commitment to reducing the burden of malaria,” said Bishop Thomas Bickerton, chair of the Global Health Initiative. 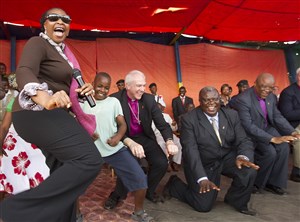 “Thanks to all partners involved in the global fight against malaria, great progress has been made in the last 15 years,” states the report. “New methods of testing, the widespread distribution of insecticide-treated nets and the introduction of Artemisinin-based combination therapies have led to a 48 percent drop in malaria deaths between 2000 and 2014.”

A song has been written and recorded in Nashville, TN to celebrate the United Methodist role in the effort. As performer Jeremy Rosado put it, "What The United Methodist Church is doing now is something that we could consider a miracle, how many lives have been spared because of what you guys have done." The song will be presented during the General Conference in Portland, Oregon on May 18

In 2010, the Global Fund and the people of The United Methodist Church joined forces in the fight against malaria through the denomination’s Imagine No Malaria campaign, which aims to raise $75 million to address the impact of malaria in Africa through prevention, treatment, communication and education.

“We thank The United Methodist Church for this contribution and their relentless efforts in the fight against malaria,” said Dr. Mark Dybul, executive director of the Global Fund. “This is the largest contribution ever received from a faith-based organization and it’s extremely encouraging to see partners of all sectors coming together to eliminate malaria”.

“The United Methodist Church’s infrastructure in Africa, including a network of hospitals and clinics, combined with the scope and resources of the Global Fund, has enabled us to forge a powerful partnership that achieves far more than would be possible alone,” said Bickerton.

The United Methodist General Board of Global Ministries and its Global Health unit provide support for the denomination’s large network of hospitals and clinics across Africa, which also receive funding through Imagine No Malaria.