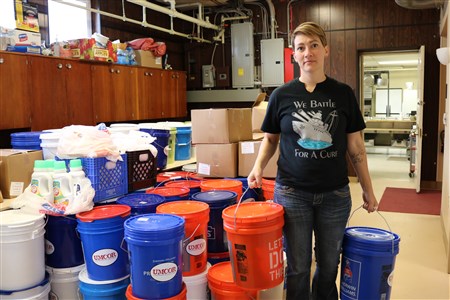 United Methodist Disaster Response Team leaders and volunteers were mobilized after severe rain and flash flooding hit areas of Southwestern PA on the evening of June 20.  Among the hardest hit was in Bridgeville, south of Pittsburgh, where one woman died and 60 to 80 homes and businesses were damaged.

Many described it as the worst flooding in 65 years. Wendy Abbott of Upper St. Clair was swept away by the floodwaters of McLaughlin Run in Upper St. Clair. Her body was found the next morning in the stream behind the Bridgeville Fire Station, nearly three miles from where her car was abandoned along McLaughlin Run Road.

UMCOR response efforts are centered at First UMC in Bridgeville, supported by Crossroads UMC’s nearby Boyce Road campus. Pat Roddy of Crossroads serves as the Washington District Disaster Response coordinator. He has been assessing damage and coordinating the volunteer relief efforts with his wife Sally.

After the floods hit, WPAUMC Disaster Response Coordinator Calvin Cook, who also leads the regional Volunteer Organizations Assisting in Disaster (VOAD), traveled to Bridgeville to meet with local leaders. Red Cross volunteers set up shop at the Bridgeville Church to assess requests for help and other faith community leaders, including the Holy Child RC Church/St. Vincent DePaul Society, the Presbyterian Church and Christian Aid Ministries (Amish and Mennonite) stepped up to handle various aspects of the recovery efforts.

Amber Charles, 24, whose apartment was flooded, was at the Bridgeville First Church to volunteer. She said she was awakened by the storms and within 15 minutes the water was pouring into her apartment on Baldwin Street. She went onto her porch to call for help and held onto porch railings until rescuers arrived in a boat.

The first load of 175 UMCOR cleaning buckets and 324 hygiene kits were delivered from the Eastbrook Mission Barn the day after the flooding. A second load followed. The WPAUMC Disaster Response Trailer, equipped with tools, pressure washers and other equipment was dispatched from the Johnstown District a few days later and volunteer leaders were trained in its use June 27.

Clean up began almost immediately, but the active recovery effort is expected to last into the fall.

An emergency UMCOR grant of $10,000 was approved on June 27 to help with response expenses through the early phases of cleanup and recovery.

The immediate need is for teams and individuals to help in “mucking out” homes. If individuals or church teams can help, email your contact information and availability over the next few weeks to relief@crossroadsumc.org.

In the long term, some homeowners will need help with construction activities such as installing insulation, drywall and flooring. Email relief@crossroadsumc.org if you have these skills and are available for any of these tasks.

At the Bridgeville First UMC, donations of cleaning supplies, large buckets and large brooms are still very much needed, said Sally Roddy.  Suggested cleaning supplies are Borax, the current recommended treatment for mold that was getting difficult to find locally.

The church has graciously provided lunches and dinners, as well as snacks throughout the day, to anyone who has come by for assistance. They are also packing lunches, which they are delivering along with bottles of water, to the folks who are cleaning out homes in the flooded areas. Donations of food such as bread, lunch meat, and buns are welcome.

Donations of cash or gift cards for places like grocery stores, Home Depot or Lowes can be dropped off at the church and will be distributed to residents who have needs.

Cook said some volunteer help may also be needed in Bethel Park, a nearby community that also was hit with flooding, as well as in a few homes in the West End of Pittsburgh.

The VOAD will hold a Multi-Agency Response Center (MARC) on Thursday, July 5 at First UMC in Bridgeville and another on Friday, July 6 from 2 p.m. – 8 p.m. at the Bethel Park Community Center at 5151 Park Ave.

The hope is to invite a broad array of agencies to participate in the MARC, including local agencies as well as regional services. Agencies that would like to participate may contact Sandi Wraith, sandi.wraith@redcross.org.