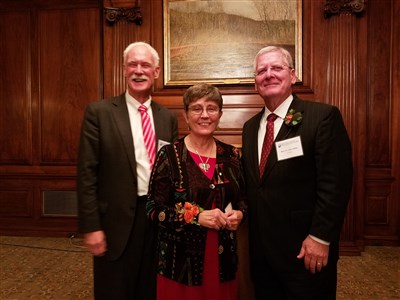 The Rev. Dr. John Miller and Diane Miller received the United Methodist Foundation of Western Pennsylvania’s 2019 Founders Day Award during a luncheon on Friday, Nov. 9 in Pittsburgh.  UMF Board Chair Tom Heisey, shown at left above, presented the award to the Millers.

The Founders Day Award pays tribute to individuals of vision who have supported and enhanced the ministry of the Foundation, and demonstrated good stewardship of spiritual and financial gifts in service to Christ and the Church.

John Miller, an ordained elder, did this as a local church pastor and while serving as executive director of Olmsted Manor Retreat Center from 1979-2001. Diane, an educator with a long history of volunteer service in the Western PA Conference and beyond, taught others the importance of building relationships and sharing their gifts both in church leadership and during the seven years she served on the Conference staff as the first Volunteers in Mission coordinator.

“She is an extraordinary woman who doesn’t realize the impact she has had on the organized church, let alone the much greater impact on people’s lives,” said John.

John Miller served as a leader in the North American Retreat Directors Association and in several Conference leadership positions, including registrar for the Board of Ordained Ministry. He was elected as a clergy delegate to the 1996 General Conference and the 2000 Northeastern Jurisdictional Conference

As VIM coordinator, Diane trained, resourced and led mission teams traveling to sites in the U.S., Russia, Paraguay, Haiti, Zimbabwe and the Balkans. She had traveled to all seven continents and more than 40 countries for education or missional reasons before she turned 50. With a B.S. in music education from Indiana University of PA, Diane taught in public schools in North Carolina and Pennsylvania and was a geography instructor at the University of Pittsburgh’s Bradford campus. She has been honored by several professional organizations for her work in international education.

Diane shared her teaching gifts through the United Methodist Church, serving as executive secretary for Schools of Mission and Mission Studies for the Women’s Division of the General Board of Global Ministries (now United Methodist Women) and has served as dean and assistant dean of the Western PA School of Mission (now Mission u). She has been a teacher at regional training schools for Mission u.

She also served twice as Mission Ambassador for the Western PA Conference, traveling to and teaching on Latin America in 1980 and India and Pakistan from 2005-2007.

In accepting the award with his wife, Rev. Miller offered thanks to many other people from whom he learned good stewardship principles. Among them were his late parents who taught him about tithing.

Later, at Olmsted Manor, he benefitted from the wisdom of Robert Groves Olmsted and Leon Hickman, who showed him the importance of planning to care for future facility needs. He pointed also to the example of the Rev. Russ and June Perry, who practiced good stewardship throughout their lives and set up an endowment through Olmsted Manor to allow young clergy to expand their horizons through world travel.

“Our hope is that you (the Foundation board and staff) will continue to find ways to not just inform people about institutional stewardship, but offer ways to form them so God can reform and transforms lives through your ministry and its extensions,” Rev. Miller said.

And, he added, “Because it is most important to remember, we thank God for allowing us to be openings in this Divine Flute of Life that allows the Breath of God to escape through us as notes for others to hear, sing, and dance to the Divine Symphony in which we have hope.”