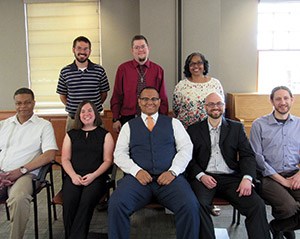 Rev. Darryl Lockie, at left in back row, and Shane Siciliano, 2nd from right in front, were among award winners at Pittsburgh Theological Seminary graduation.
7/4/2017

Two United Methodist pastors were among members of the Class of 2017 at Pittsburgh Theological Seminary who were awarded prizes during graduation exercises.

Shane Joseph Siciliano, who began serving as pastor of Point UMC in the Johnstown District on July 1, was one of two graduates awarded a Robert E. Lee Church History Prize.  In addition the M.Div. he earned from PTS, he earned a Master of Social Work from the University of Pittsburgh. He  is a part-time local pastor in the Conference.