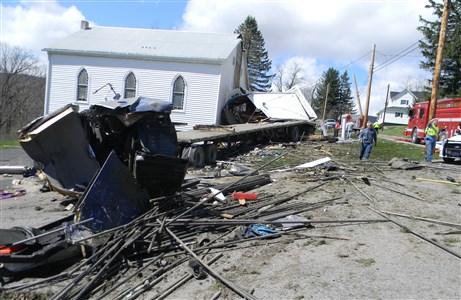 The historic Mount Harmony United Methodist Church was severely damaged on Tuesday, April 4 when a fully loaded tractor-trailer hauling small-diameter steel rods crashed into the building. No one was hurt except the driver, who reportedly injured his hand. 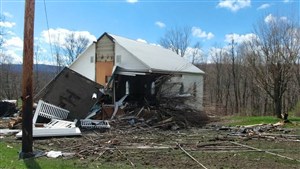 The church building, however, is a total loss, said the Rev. Kenneth Haines, pastor.  "The entire load of several hundred one-inch steel rods flew all over the place. Some of them ended up buried in the ground and went through the basement walls," he said.  "It also took out a corner of the building."

The historic structure sits about 10 yards off the roadway near the bottom of a steep grade on PA Route 160 as it descends Big Savage Mountain. It's not the first time trucks have crashed on the property after rounding a curve in the road.

"It's the fourth time in my six years here," said Haines. "All the others caused superficial damage. Three took out trees that protected the building. A garbage truck took out the walkway. I guess we just ran out of trees!"

The pastor was awaiting inspections and damage assessments and asked for prayer as the congregation determines future action. For the next two weeks, he said, the small congregation will worship at Palo Alto UMC, one of its sister churches on the Hyndman Four Point Harmony Charge in the Connellsville District. Another church just down the road in Wellersburg  offered the use of its building, Haines said.

The Mount Harmony church was built in 1850, four years after the Evangelical Association's Pittsburgh Conference organized a congregation. Basement classrooms were added in 1962.

The Rev. Bev Roscoe, a former associate pastor on the charge, shared photos of the damage and called the loss devastating.

“To some it may be a building, but to those who have worshipped there, it holds memories of baptisms, and weddings, confirmations and funerals,” she said in an email to colleagues.

“This was my first appointment, and I know at least two other clergy who had this church as part of their first appointment as well. They were great at loving us, and helping us, and sending us on.  Now it is our turn to love them and prayerfully send them to whatever future God has planned for their faithful community.”