Tolerance Not Enough: A Response to Hate 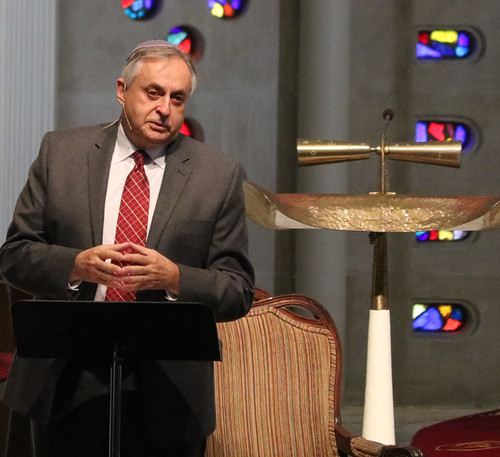 PITTSBURGH, PA -- There was a visible police presence and a packed sanctuary at Christ United Methodist Church in suburban Bethel Park on Oct. 28 for Tolerance is Not Enough, an afternoon forum featuring a keynote address by an Ohio rabbi who spent years promoting interfaith understanding. Scheduled a few months ago, the relevance and urgency of the forum’s message was underscored when an armed man entered a synagogue in Pittsburgh on Oct. 27, killing 11 and wounding six others, including four responding police officers.

“Words are difficult, but not impossible (after the synagogue massacre),” said Rabbi Abie Ingber, a life-long advocate for immigrant and refugee rights who founded and recently retired as executive director of the Center for Interfaith Community Engagement at Xavier University in Cincinnati. “Up until yesterday, I believed that in the seven days of creation, humans were the pinnacle. Maybe we are not the pinnacle of God’s creation. We were the last things created...but...we have to get our priorities right.

“We must build effective utilitarian bridges. In a diverse world, we aspired to tolerance. That was it!” he said. “But another human being...created in the image of God, we should just tolerate? Does that really work when you believe that every person is created in the image of God and is a child of God? We must celebrate them! The road to tolerance is the road to failure!”

Instead, the Rabbi said, “Our world needs each one of us to welcome and love each other unconditionally...there can be no exceptions!”

The son of Holocaust survivors, Rabbi Ingber said he comes from a world where love triumphs over hatred. His mother’s entire family was killed and she was one of the last survivors of her Polish town. She was miraculously helped in her escape from Nazis and sheltered by a series of “six righteous Christians.” She met his father in a displaced persons camp. Eventually they settled in Canada.

“It would have been easy to raise me with hatred, but that would not have been my parents way,” the Rabbi said.

“If I had two hearts, I could love with one and hate with the other -- but God gave me one heart and I choose to use it for love,” he declared.

To help heal our communities and bring justice and peace to the world, he said, we must:

In his work at Xavier, Rabbi Ingber encouraged engagement and built relationships with students of all faiths from many places, including a student from Saudi Arabia who served on an Interfaith community cabinet. Among other things, the rabbi introduced the young man to chicken soup with matzos balls. When the young man was going home for a break, he insisted he wanted to bring the rabbi a gift from his homeland and repeatedly asked what he wanted. Finally, the rabbi said he would like a used prayer rug that would be “full of prayers and tears.” When Khalid, the young man, returned, he gave Rabbi Ingber a prayer rug that had belonged to his grandfather.

“Would you ever imagine that a Saudi young man would give to a Jewish rabbi his grandfather’s prayer rug -- in the student center of a Jesuit University?” he asked, displaying the rug.

To build meaningful relationships with others, Rabbi Ingber offered three simple rules:
Rabbi Ingberg also moderated a panel discussion by faith leaders who related some of their own reactions and experience with intolerance and hate. The panel included Rabbi Amy Greenbaum of Beth El Congregation of the South Hills, Imam Hamza Perez of the Islamic Center of Pittsburgh and Light of Age Mosque, Rev. Dawn Hand, superintendent of the United Methodist Church’s Pittsburgh District, and Rev. Dr. John Welch, vice president for student services and community engagement for Pittsburgh Theological Seminary.

As the discussion began, Rabbi Ingber cautioned against focusing on the past, saying, “Will we waste these precious moments arguing about who suffered more...or will we commit to building relationships? We do have to visit our history, but we have to move forward.”
News