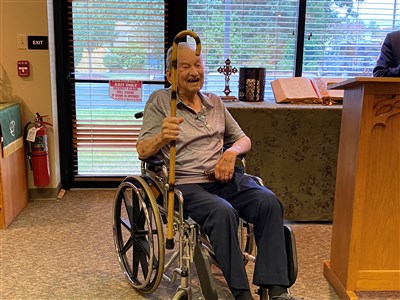 9/7/2021
On July 12, 2021, Erie-Meadville District Superintendent Dennis Swineford presented the Thoburn Cane to Rev. Reed Hurst, 92, in a ceremony held at the Conference Center in Cranberry Township. The Thoburn Cane, named for Bishop James Thoburn, is presented to the oldest clergy member of the Western Pennsylvania Conference of the UMC with the most years of service.

During the ceremony, Rev. Hurst listened as gathered family and friends described his ministry and influence. As they thanked him for his legacy and impact in their lives, Hurst pointed skyward and proclaimed, “Thank Him!”

“Most important is the mark he has made in the lives of people he has loved and led into a personal relationship with God in Jesus Christ,” remarked Rev. Swineford. “His love of our Lord and his devotion to His Kingdom’s work has been an inspiration to his colleagues through the years, myself included.”

Rev. Hurst felt a call to ministry as a young child because of his father, a Methodist pastor who served for 50 years. He set that calling aside until his brother David, who had planned to be a missionary, died of polio at the age of 17. His brother was such an influence on him that upon his death, Hurst accepted that God was calling him into ministry, said Rev. J. Mark Hurst, Reed Hurst’s son, pastor of Albion Grace UMC.

Reed Hurst graduated from Allegheny College before earning a Master of Divinity degree from Garrett-Evangelical Theological Seminary. He also holds an MA from Scarritt College for Christian Workers, which he chose because of its specialized program in evangelism.
Licensed to preach in 1946 in the Methodist Episcopal Church’s Erie Conference, Rev. Hurst served in active ministry for 46 years. In 1949, he began serving as a supply pastor on the Little’s Corner’s Charge before moving to Illinois to attend seminary. There he served in the Rock River Annual Conference at Harvey Academy from 1951-1955. Ordained an elder in 1955, he served Epworth Church in Warren, PA (’55-’59); Brooklyn Heights Church in Jamestown, NY (’59-’61); New Virginia, PA (’61-’67); Greensburg First (’67-’71); and Corry First UMC(‘72-’77).  From 1977-1980, he served as the Conference Evangelism Coordinator, then moved to Christ Church in Erie, where he served his last and longest appointment from 1980 until 1992, when he retired from active ministry.

Despite retiring from active ministry, Rev. Hurst continued to serve as a visitation worker for shut-ins in Englewood, Florida. He has been married to his wife Barbara for 70 years and is the father of four children.

Because two clergy qualified -- Rev. Hurst, who began ministry in the Methodist Erie Conference, and Rev. Gene E. Sease, who began in the Western PA Evangelical United Brethren Conference -- two Thoburn Canes are being presented this year. Arrangements are still being made to honor Dr.  Sease, who retired in 1989 as President of the University of Indianapolis. The EUB and Methodist denominations merged at a Uniting Conference in 1968.
News