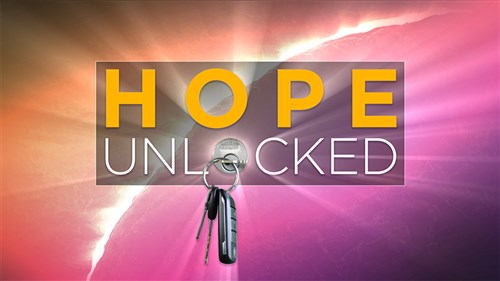 “Hope Unlocked,” a package of 2020 Easter worship resources, was developed by a Western PA clergy team working with Jason Moore of Midnight Oil Productions. It grew out of planning for a May workshop which had to be cancelled.

In August of 2019,  Rev. Amy Wagner, Director of Congregational Development and Revitalization for the Conference, and Rev. Doug Dyson, pastor of Sharon First UMC, began working to bring Moore to Western PA to lead a workshop.  Doug, who met Jason years ago at his seminar on carrying the message of Sunday beyond the worship experience, thought pastors in our conference would benefit from his expertise.

They scheduled Moore to lead a May workshop in Western Pennsylvania focusing on worship design using symbol, visuals and creative metaphors in worship.  But as they prepared to publicize and open registration, growing concerns about COVID-19 made it obvious that Jason would be unable to offer an in-person workshop. The team decided to shift their focus.

“About three weeks ago, Doug and Jason and I jumped on a Zoom call to discuss alternative plans,” Amy said. “We talked about several options, but the one that felt to us like it had creative possibility and also met a clear need for our clergy and congregations was to develop some ready-to-use Easter worship materials.” The original team grew to include contributions from Rev. Dean Ziegler, Rev. BT Gilligan, and Katie Letts, a second-year seminary student at Wesley Theological Seminary.

“Our ‘felt need’ was that this was certainly going to be a very different kind of Easter,” Doug said. “The whole atmosphere was different. Even the spirit/feelings/emotions around the planning was different and was going to be so for everyone.”

As they began planning, the team members asked themselves how they could convey the hope and promise of resurrection in the midst of anxiety and fear that is spreading in our world. They thought about the closed businesses, schools and sanctuaries and the way we’ve locked our own front doors against the world. They considered the closed tomb and the disciples hiding behind closed doors in John 20 and wondered, “What is the good news - the gospel - that we can proclaim from behind closed doors?”

The team drew parallels between the opening of the tomb and the opening of our doors before focusing on what Jesus said to the disciples when he found them behind locked doors in John 20:19-20.  “On the evening of that first day of the week, when the disciples were together, with the doors locked for fear of the Jewish leaders, Jesus came and stood among them and said, “Peace be with you!” After he said this, he showed them his hands and side. The disciples were overjoyed when they saw the Lord.”  In this scripture passage, Jesus offers peace and renewed hope.

“Hope Unlocked” became the theme of the Easter resources, emphasizing that Jesus unlocked hope for the fearful disciples and does the same for us. “It was enough that first Easter morning that Jesus met those first disciples where they were: behind locked doors.” Doug said. “Even though we too  will be behind closed and locked doors, the Resurrected Jesus will come and meet us this Easter as well… Right where we are.”

About the Resource Bundle

The Easter Resource bundle for local churches includes graphics, spoken word pieces, at-home liturgies, a Love Feast celebration and sermon prompts- all of which speak to the different kinds of Easter celebrations that we will likely have this year. “We tried to be really attentive to the different ways that people will gather for worship this Sunday,” Amy Wagner said. “Virtually, by phone, around family dining tables, even alone at home but gathering loved ones in hearts.  We wanted to offer resources that could be adapted to any of those settings.”