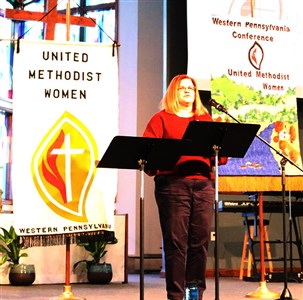 Racial Justice issues were a focus of the 2021 Conference United Methodist Women’s annual meeting October 23. In one presentation, the Rev. Connie Hoeke, a member of the Erie-Meadville District Anti-Racism Team, compared her experiences as the child of white working parents in a small Pennsylvania town to those of Debby Irving, author of Waking Up White. In the book, Irving describes how she moved from being totally oblivious to the white privilege she grew up with to learning about its often unintended consequences and working toward racial equity. Following are excerpts from the first part of Rev. Hoeke’s presentation.

Debby Irving grew up in the upper middle class white suburban neighborhood of Winchester outside of Boston, a leafy green pond and lake filled area north of the city. Her growing up years were spent at the country club with her white friends. She grew up believing that everyone’s life was like this. She was socialized to believe that the Native Americans just drank too much and became dangerous when doing so. Her history books did not present slavery in a way that would make her realize the horror of it.

Her socialization was one of white privilege. She graduated college without any debt and went to work at a low-paying job serving people in black neighborhoods, while living in low-cost housing due to contacts she had.  She never visited the black neighborhoods to find out what the needs were, but assumed it would be great for the residents of those neighborhoods to get a view of her world. So she set up trips in which they would be bussed from their neighborhood to a show or a play. She later learned that this was not what they needed. In fact, one young boy was very freaked out, exclaiming “Geez, I have never seen that many white people in one place.”

My life was different from Debby’s and yet in some ways the same. I grew up in a small town in Western Pa., with lower middle class working parents. And yet I remember having everything I needed. I was also socialized and taught the same way as Debby. I never thought that the one black girl in my school probably felt out of place. And as a child I tuned out when my mother and grandmother spoke about the “Black Church”, not thinking about how that must have been for the few blacks in our town.

I went to school at Temple University and was the first one in my family to graduate from college. Temple is located in a poor Black neighborhood north of Center City Philadelphia. My roommate was Black but that bothered me much less than it bothered my mother. She and I got along fine that first week. And then there was the mixer in the Lounge downstairs. I felt like the young black boy who said, “Geez I never saw so many White people all in one place.” It was hard to be in the minority. Over the years I realized that my short amount of time in the minority was very small and yet people of color feel this way all of their lives. I could walk away from it but they cannot.

Women and men both were created in the image of God and were equal in the sight of God. But we know that is not always the way it has been or still is. Male is dominant in America. I also grew up seeing pictures of Jesus with blonde hair and blue eyes, even though he was Middle Eastern. God created all cultures and sees us as beloved children of God. This applies to everyone. 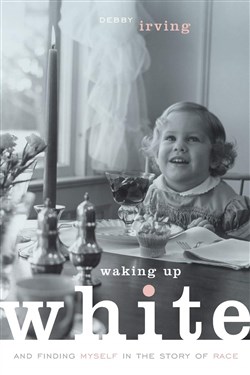 For both Debby and I there was a time of awakening. Hers came in her 40s as she attended a class on race and culture that she only took because she couldn’t get into the class she had wanted. And she learned about Black culture, including slavery, and how the Europeans who came to America overran and slaughtered most of the Native Americans. She learned about how those Europeans stole Africans from their homeland and forced them into slavery, being bought and sold like cattle.

Debby and I both grew up thinking that we would follow the American dream. And we actually both did. But then she woke up to reality in her class as she found out about disparities between Whites and persons of color. The disparity which woke her up the most was when she learned that the GI bill which had helped her father with education and a mortgage and down payment on a nice house in a nice neighborhood had not really been there for the Black veterans who fought right alongside him.  Black veterans did not have the same access to these funds, and even when a few of them did, they were unable to buy a house in the neighborhood that they wanted due to redlining. They were relegated to lower class housing which would depreciate in value during the time that they owned it.

I woke up a little later in life than Debby did, but this also disparity bothered me very much. My dad did not take the opportunity afforded by the GI bill, but it was his choice. The black veterans did not have a choice – it just wasn’t available.

Learn more about the UMW and the Charter for Racial Justice at unitedmethodistwomen.org/racialjusticecharter

See UMW Annual meeting video and other information at wpaumc.org/UMWomen