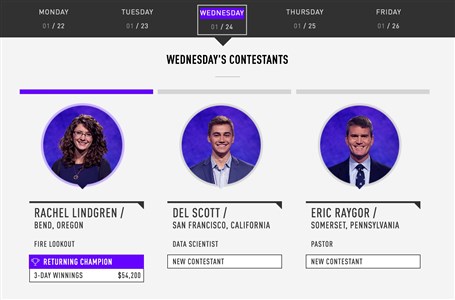 Rev. Eric Raygor, pastor of Somerset Grace UMC and co-chair of the Conference Board of Ordained Ministry, can add a new line to his bio: Jeopardy contestant. He appeared Wednesday, Jan. 24 on the popular, long-running game show airing at 7 p.m.

In June 2016, after answering a 50-question online test the show uses to find contestants, Raygor was invited to a live audition in Pittsburgh that included a written test and a mock competition with host Alex Trebek asking the questions.

"They don't tell you anything or the score on the test," he told reporter Michelle Ganassi of the Daily American newspaper in Somerset.  "They just say you might hear from us in the next 18 months. They said that there were over 70,000 that took the online test and 3,000 to 4,000 at the auditions."

Of those, about 300 are chosen to appear on the show, he said.

"Honestly, I didn't expect to hear anything," he said. "I felt fairly good about the written answers in Pittsburgh. I did not feel good about the mock game."

He was contacted In September and invited to travel to California to tape an episode. He told the Somerset newspaper he made the trip in late October, the week after his father died, and wore his dad's necktie for the taping.

To prepare for the show, Raygor and his wife Kimberly, a high school English teacher, watched two episodes of "Jeopardy" a day, went through old game questions, memorized all the state capitals and made a study guide on U.S. presidents.

Contestants pay their own way to California, and no matter the winnings accumulated during the show, the third-place contestant is awarded $1,000 and the second-place finisher gets $2,000.

Despite a late-show surge, Raygor finished the evening in second-place behind returning champion Rachel Lindgren. When the show is over, the second and third-place contestants are done.  "It is very abrupt," he told the Somerset newspaper reporter.  "You sign your tax documents with what your winnings are, and that's it."