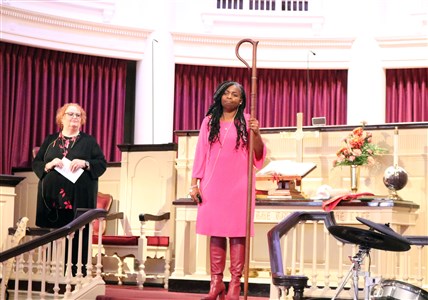 In the Indiana District, she is assisted by the Rev. Howard Greenfield, a retired elder now serving as ministry assistant, and, as needed, by the Rev. Robert Zilhaver, who also serves as Connellsville District Superintendent. The Shared District Leadership model is a pilot program in Western PA.

In a clear and powerful message, Rev. Smith acknowledged the deep divisions in our churches and in our nation, but said it's time to adopt the attitude of Jesus. Division, she said, is really nothing new.

"At least one-third of the New Testament deals with division and polarization," she said, adding:

As we look at our scripture from Philippians, it would seem that there were some issues within the church at Philippi. The letter begins with Paul writing about his gratefulness for the church. He goes on to talk about proclaiming Christ and continues relating the struggles and the joy of the Christian life. Then, in Chapter 2, Paul gets down to what is bugging him – Division!"

He tells them, "Please! Think as one, love as one,
-be united and in agreement.
-Don't do anything out of selfishness.
-Instead of looking out for number one, watch out for the good of others.
-Act like Jesus!"

It's time, she said, for all of us to act like Jesus!

DS Smith said she grew up in the United Methodist Church and she loves the Church. It was a safe place for her, a place where she was accepted and encouraged to follow where God led her.

"One of my greatest fears and cause of sadness is that too often churches are no longer safe places where we love one another and encourage and nurture each other," she said. "Instead they have become places of division, judgment and mean-spiritedness.

"Why does that happen? The answer is pretty simple - because we don’t act like Jesus!
We’ve forgotten who we are as followers of Jesus...And we’ve forgotten whose we are.
We have not adopted the attitude of Jesus, the one we say we follow."

Referencing the reading from the Gospel of John (John 8:1-11), she described how the church leaders were ready to stone a woman who had committed adultery, to kill her, but Jesus words and action sent them away.

"When I think of Jesus’ life as we read about in the Gospels, I see Jesus walking through his community looking for people....mostly for two kinds of people: people that religion had forgotten and people that those in power were oppressing," she said. 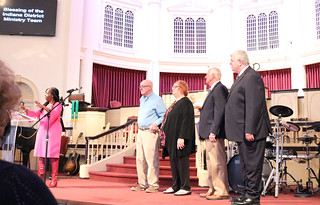 "Our stones are words -words of division, words of  judgment, words of hate and even acts of violence."

We have to do better -- and we will do better, Rev. Smith said, suggesting the following ways:

Using a quote attributed to Rev. Hugh Hollowell in Drop the Stones by Carlos A. Rodriguez, she said: “Every time we use religion to draw a line that keeps people out, Jesus is with the people on the other side of that line.”

When we exclude people for whatever reason we believe is valid, the truth is we are excluding Jesus, she added.

"If we are keeping people out instead of looking for them, gathering them up like Jesus did –then we really are not the church Jesus expects us to be. And maybe that’s our biggest problem."

Smith said with a lot of division in the church,"because we don't know what the future holds, we have decided to use that as an excuse to stay in a holding pattern and not do ministry-we’ll just wait and see!”

"No more of that!" she said. "Because we never know what the future holds and most often the future is not what we thought it would be."

By getting so caught up in waiting for what might or might not happen at General Conference, she said, "we miss out on the joy of being the church, of doing what Jesus has called us to do-to love one another, to serve one another and to adopt the attitude of Jesus Christ!

"Adopting the attitude is a pretty tall order, and maybe you’re thinking, 'that’s never going to happen'" she said. "And that’s true IF we don’t make a conscious, prayerful decision to follow Jesus and Adopt his attitude –and change our attitudes!"

:Jesus prayed that we as the church would be one as He and God were one so that the world would believe our message: that Jesus was sent by God to redeem this world," said DS Smith. "That’s our message-a message of redemption, not division!"