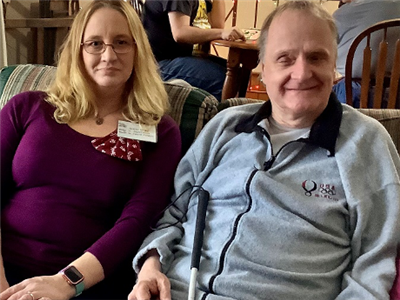 The Ruth M. Smith Center in Sheffield, PA is a National Mission Institution of the United Methodist Women (now United Women in Faith) and is operated by a Board of Directors that includes United Methodists and residents of the northwestern PA area from other denominations.  In 2022, its Centennial year, we're celebrating the mission and ministry of the Smith Center by sharing stories.

--By Mark Lindberg, Board Member, The Ruth M. Smith Center--

From time to time in our lives, we meet a person who leaves such an impression that we describe the person as ‘unforgettable.’  Rusty Shuster, a resident at the Ruth M. Smith Center for 32 years, is one such person.

I met Rusty for the first time 30 years ago at a church musical event.  He couldn’t see me as he arrived, being led arm in arm by a RMSC staff member.  Rusty’s white cane moved easily back and forth as he advanced gradually to a pew near the front of the church.  A friendly smile filled his face and a harmonica stood prominently in his shirt pocket.  Of the many attending that evening, no one enjoyed the service more than Rusty!

In the Ruth M. Smith Center’s centennial year, dates are important.  There is, of course, 1922, the year the Center was started as an orphanage.  There are important decade dates:  In the 1960’s, the Center transitioned to a home for at-risk youth, and in the 1980’s, the Center became a Personal Care Home and added a Day Care facility.  And then, there is February 24, 1990.

Rusty remembers the date without prompting and he quickly announced its importance, “February 24, 1990 was the day I arrived at the Ruth M. Smith Center as my home.”  Before that, Rusty had resided in Cleveland.

“It’s beautiful here,” he reflected, referring to life at the RMSC, not the surrounding landscape of hills and forests which he cannot see.  He is the Center’s only blind resident.

“Covid has disrupted things,” offered Rusty, who is accustomed to a daily and weekly routine of activities. But, even with the disruption of the virus, he is active in the affairs of life.  Rusty is up by 6:30 every morning, eats breakfast, and then spends 35 minutes “riding my bike.”  He is disciplined to the everyday exercise.  Using his headphones, he listens to the radio, especially sports and music.

“I’m a Pirate fan, but was a Cleveland Indian fan at one time,”  he says.  As a lover of song, Rusty also listens to a variety of musical styles.  What is more, he never misses the weather information.  The assistant director of the Center, Ann Mitchell (formerly supervisor of Rusty’s building) remembers his daily weather reports to her and the time he attended a Halloween party as a weatherman.

As many of his friends remember, Rusty was a harmonica player when he arrived at the Smith Center.  No matter where he went, a harmonica was in his shirt pocket.   Asked to play, he always obliged with a strain from a familiar song or hymn.  “I don’t play anymore. But I think I know where it is.” commented Rusty.  Perhaps this, too, is part of the disruption of Covid.

Nevertheless, he still sings in the shower, and he especially likes joining in with anyone singing Christmas carols.

Like so many of the Smith Center residents, Rusty can be found sitting on the long porch that faces Horton Avenue and the township playground beyond.  “I like to sit outside in the spring and summer.  The Firemen’s Festival (August) and the Johnny Appleseed Festival (October) are my favorite times.”

Since 1990, he has had many caregivers.  In conversation with Rusty and caregivers, it seems mutual respect and friendship and support have always been in place.   “The one I liked the most was Janice Lyle.  She was always friendly.”  At Rusty’s arrival in 1990, Janice was serving as executive director of the Smith Center.  She now serves as a board member and remembers Rusty, too, as "unforgettable."

Perhaps it is Rusty’s personable smile and adventurous nature that is so special to those familiar with his journey through life.  Despite the challenges, Rusty engages himself with new opportunities and with people.  Ann tells of his adventures at horseback riding, risking the ferris wheel, attending summer camp, and making friendships with strangers of all ages.  He hasn’t distanced himself from challenges, but rather engages them.  That’s special.

Rusty misses his parents.  He talks of his mother and experiences with her in Cleveland.  But he also mentions his father and shares the fact that they are both gone.  In place, the staff and residents of the Smith Center have clearly become his family.  Here he has a “beautiful” home.

Thirty-two years have passed since Rusty’s arrival; and now—in 2022— the Ruth M. Smith Center celebrates its centennial anniversary!  One hundred years of history paints a mural of service to children, adults, and families.  Lives—often of the most disadvantaged and challenged—have been supported, encouraged, and protected.  Help was given along the way. That continues to define the RMSC’s mission.  In our centennial year, no one illustrates the success of that mission better than Rusty Shuster!