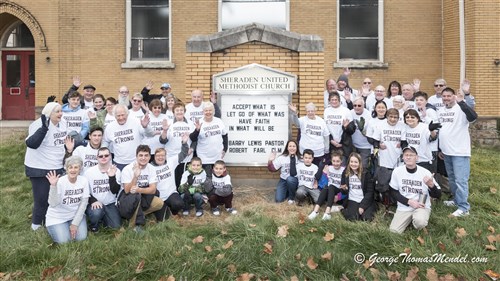 On a cold day in December, about three months after a fire that destroyed their church building, the people of the Sheraden United Methodist Church gathered together for a group picture before the church is torn down. Plans are in the making for a new structure to be built on the same corner of Chartiers Ave and Citadel Street in Pittsburgh.

It was about a month after the fire when a young member of the congregation said to his mother, “Mom, we should get t-shirts with “SHERADEN STRONG” printed on them.” He wanted them for the Sheraden Methodist Dartball Team. His mom liked the idea, but said they should make sure everyone in the congregation got one”. 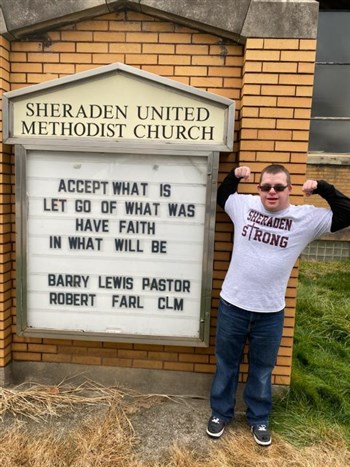 Then the young man, Michael Maker, a fourth-generation Sheraden member, added: “We should sell them to help raise money for the fire fund.”

The owner of TeamSportswear, Mark Thompson, suggested making the “T” in STRONG serve as the symbol of the Cross.
Michael came up with the design himself and his mother, Sandy Maker, took it to Team Sportswear for printing.

Michael works at the Crafton Giant Eagle and is a Special Olympic athlete participating in basketball, as well as other sports, over the years. Michael has jumped into the cold icy waters of Pittsburgh’s rivers for the Polar Plunge along with the Pittsburgh Police, Port Authority Police and other law enforcement officers to raise money for Special Olympics. He also participates in the Torch Run from PNC Park in Pittsburgh to Penn State to kick off the summer games held at Penn State.

Michael is very involved in church activities and functions. So far, a total of 300 shirts have been sold throughout the community and beyond.

The church also has a Go Fund Me page -- “SHERADEN UNITED METHODIST CHURCH-HELP US RISE UP FROM THE ASHES” and a Fire Fund (Sheraden United Methodist Church-Fire Fund) account at First National Bank to help raise money that the insurance may not cover.

The congregation is standing strong through the process of planning the new building as a place for outreach programs that serve the Sheraden community and surrounding areas. They ask for your prayers during this time and stand with them as they are “SHERADEN STONG”.