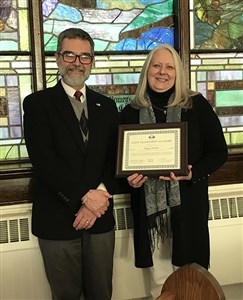 Peggy Senior, who was part of the first class to experience the Laity Leadership Academy launched by the United Methodist Foundation of PA in 2019, recently became the fourth participant to complete both modules of the training. She received her Certificate of Completion from the Dean of the Academy, the Rev. Dr. Joseph Patterson, during worship on Sunday, February 27 at her church, DuBois Lakeside UMC.

The Academy is designed to empower laity to lead local churches in the ever-changing landscape of congregational life.  Participants read some of the greatest books currently available on leadership, experience seminars led by the finest leaders in our conference, engage with one another in dialogue, and build relationships that provide support for the journey, Patterson said. 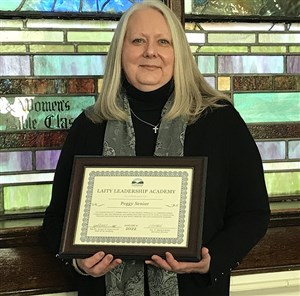 Each one of the Academies is structured around two modules.  The first module is one-year long, bringing participants together in several weekend retreats at various locations around the region.  During these retreats, topics relevant to congregational leadership in the current culture are covered.

The second module is custom designed, allowing participants to individually explore an area of leadership for which they are especially well equipped. That determination is made after an assessment of the participant’s spiritual gifts and strengths.  The module is open-ended; it can be accomplished at whatever pace makes sense to the individual participant. In total, the entire Academy experience provides 100 hours of training.

For her second module, Peggy looked more deeply into Conflict Resolution, and developed a project that would help her understand the difficult dynamics needed to help human beings live in peace with one another.

"But something else happened to Peggy along this journey,” said Patterson. “It was almost as if she could not get enough of the conversations that we were having and the issues we were discussing.  It was as if she was discovering something about herself of which she was not previously aware; she was hearing a voice that the noise of life was preventing her from hearing previously.

"Peggy discovered that the voice of God was speaking to her, and that she was being called to serve the Kingdom of Heaven in a pastoral role," he explained.

“So while the Laity Leadership Academy is designed to equip lay persons to serve the church, we were also able to help Peggy discover her call to pastoral ministry.  I am pleased that the Foundation and our Academy have been used by God in such a way, and pleased to know that Peggy is now serving Lakeside Church as a member of the pastoral staff,” the Academy Dean told the Lakeside congregation.

Peggy Senior was appointed to serve part-time as an associate pastor of Lakeside, effective Feb. 1, 2022. She is the second of the Laity Academy graduates to begin serving in a pastoral role. Karen Martin, the first participant to complete the Academy training modules, is now a Licensed Local Pastor, who began serving churches in the Connellsville Cooperative Parish on Dec. 1, 2020.