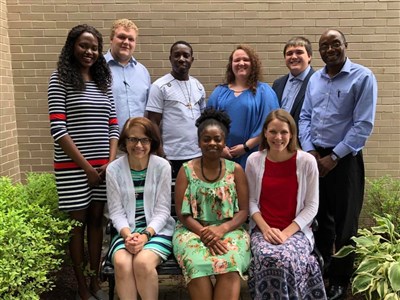 Three seminary students served at churches in Western PA over the summer as part of an internship program that also included college interns. (See Internships Help to Define Ministry Calls) The program was funded through an ongoing partnership between the Board of Ordained Ministry and the Cabinet.

Students went through an application and interview process before being matched with a church based upon their gifts and the sort of experience they were seeking.

Megan Miles of Coalport UMC in the Johnstown District recently transferred to Pittsburgh Theological Seminary.  She senses a call to deacon’s orders and wanted to spend the summer discerning whether she was called to the church or a para-church setting.  Megan served alongside the Revs. Scott and Sharon Hamley at Seward and New Florence UMCs.  This was particularly unique, because the two churches are on different districts (Indiana and Johnstown)!  While there Megan was able to work with the youth group and was involved in a host of other kinds of youth and children’s ministry.  This was valuable experience for Megan and she said enjoyed the opportunity.  As she continues her studies at PTS, Megan will be doing field education with First UMC in Pittsburgh.

The Rev. Wellington Chiomadzi, from the Zimbabwe West Annual Conference, is a Master of Arts Student studying spiritual formation at Garrett-Evangelical Theological Seminary.  He was interested in the internship because of his familiarity with our Conference partnership with the Zimbabwe Episcopal Area, as well as his desire for a cross-cultural immersion experience.

Wellington served alongside the Rev. Matt Judd at Glenwood UMC, as well as with Kurt Crays of Erie United Methodist Alliance.  Wellington was able to lead a class on “Evangelism for non-Evangelists”, as well as participate in things like summer day camp, VBS, and in the work EUMA does with families and veterans who have been homeless.  In these experiences, he was particularly looking to see “how ministry is done differently in the American context as compared to the Zimbabwean context,” which he has been part of for the past 15 years.

"I was encouraged to note that there are some scheduled devotions and prayer sessions being conducted with the residents” at EUMA's facilities, Wellington said. "I hope that all UM churches in Erie will become more available to beef up this noble cause in the future.”

The Rev. Innis Miller, III, also came from Garrett-Evangelical Theological Seminary, where he is a Master of Arts student.  Innis is from the Liberia Annual Conference and sought a cross-cultural immersion experience.  He was partnered with St. Paul’s UMC in Allison Park, working with the Revs. Jeff Sterling and Karen Slusser.  This was a particularly good match, according to Jeff, because of St. Paul’s new vision to be “an inclusive and diverse church…working for justice and peace in our world.”
Innis was able to preach and provide pastoral support, as well as get involved with North Hills Community Outreach.  He was particularly touched by that experience, calling it “eye-opening”.  "It clearly gives me an additional definition for what we consider the proclamation of the Word by words and actions,” he said.

Innis also appreciated the opportunity to be involved in a prayer vigil and listen to the conversation around the table, saying that “is the way to go in being a Christ-like people.”

“Our Seminary internships didn’t look like they have in the past,” says Susan Moudry, coordinator of clergy excellence, who coordinated the internships.  “We had two international students, and a young woman called as a deacon.  Yet, we are grateful for the way God was and is at work in the process,” she added.  “These were unexpected blessings.”

In fact, Matt Judd encouraged Western PA “to continue with the internship program, especially with international students, as it was the international flavor of the experience that seemed to be the best part for everyone.”  Jeff Sterling seems to agree, saying that St. Paul’s experienced “a real ‘wake-up call’…as to how differently we may see the world, contingent upon our life experiences.”