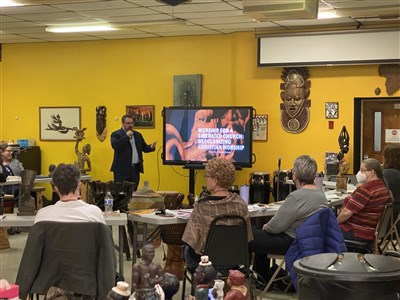 Carlen Blackstone, a member of Dutilh UMC in Cranberry Township, reflects on her experience at the Western PA Conference Anti-Racism Summit. This summit was organized by WPAUMC Commission on Religion and Race (CORR) and focused on the intersection of faith and race. 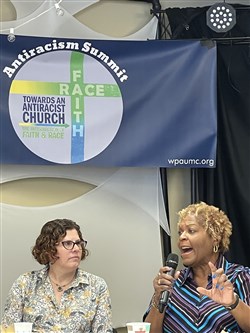 After spending most of October 20-22 attending the Conference-wide Anti-Racism Summit, it is naturally hard to capture all that I learned and felt compelled to consider in a brief article, but I know some of you might want a synopsis. I know this is heavy stuff and we can be tempted to avoid it, refute it, or just read it and move on.  I often succumb to that temptation and I realize all too well that unless I am intentionally engaged in listening to others’ stories without dismissing them, I am choosing to perpetuate the status quo.  For those who want to be challenged, keep reading…

Mark Charles, author of “Unsettling Truths,” began our experience by sharing about the harm that has been done for centuries by the Doctrine of Discovery articulated by Pope Nicholas V that gave license for European powers to colonize the Americas without regard for their current inhabitants. The presenters represented Native, Latinx, Asian, and African Americans who all told stories of how racism has historically existed in this country from its inception in contrast to the view of history we have all been taught. For those of us privileged to be white, we have been able to dismiss much of this as “that was then, this is now” and “we’ve come a long way since then.”

However, current events teach us that we still have a long, long way to go since 500+ years of history are not easily erased, especially in the lives of the traumatized  We were also reminded that trauma lasts for seven generations. I recall my Chinese American daughter’s experience at the Memorial Hall of the Victims of the Nanjing Massacre during her Mission of Peace journey to China alongside other youth from our Northeastern Jurisdiction, none of whom were also Chinese. She said afterward, “These were my people,“ explaining why she was affected more deeply than any of her peers.

We were asked to simply acknowledge and lament the pain experienced by others in our human family, especially since much was done in the name of Christianity. 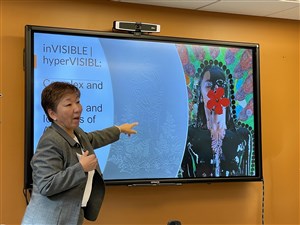 Dr. Boyung Lee from the UM Iliff School of Theology shared that hate crimes against Asian Americans increased 339% last year even though African Americans still experience the most. I know very little about being a victim of a hate crime, but for my daughter, the 339% increase toward Asian Americans last year has changed her daily reality. Hate crimes toward other people of color continue to rise as well. As I listened to the personal stories that various Native, Latinx, Asian, and African American presenters shared about trauma, systemic practices, and historical roots, I felt a stronger desire than before to lament our past and care about a different future.

Dr. Angela Parker, Asst. Professor of New Testament and Greek at the McAfee School of Theology, led our Bible study on verses from Galatians, introducing us to reading Scripture with the eyes of “the other” which made Paul’s statement that “There is neither Jew nor Gentile, neither slave nor free, nor is there male and female, for you are all one in Christ Jesus” even more counter-cultural.  As an African American woman, she shared about her personal journey of unlearning a western European version of Christian theology.

We engaged virtually with two representatives from Crossroads, a Chicago-based initiative to combat racism.  They reminded us that six principles consistently reinforce institutional racism, all of which must be dismantled and replaced in order to become an anti-racist church.  They are:

Most of all, we were given opportunities to connect with others who are passionate about effecting change and we dreamed together about how we as individuals, local churches, and an Annual Conference can work to not simply be allies who care, but co-conspirators who actively use our white privilege to sacrifice for the other as Christ would call us to do.

My daughter who has taught me much about her reality and the Cranberry Area Diversity Network’s efforts have given me a place to connect. Dutilh’s study groups and continued dialogues with members of Warren UMC, a historically black church in the Hill District, have enabled some of us to learn more about this journey.

Jay Pendleton, a member of Warren and co-chair of the Pittsburgh District Anti-racism Team, continues to remind us of Margaret Mead’s quote: “Never doubt that a small group of thoughtful, committed citizens can change the world; indeed, it's the only thing that ever has.”

I chose to write this to inform you about the foundations and lasting effects of racism, our Conference’s work in that area, and what God might be calling some of us to do.

As we signed the prayer “Wash over us, O God.  Flow through us that we may bring healing to a wounded world,” I was reminded of how the fruits of God’s Spirit can change current reality one person at a time, one prayer at a time, one relationship at a time, and one day at a time.

If you want to hear more details, feel free to contact me at c.blackstone2016@gmail.com.