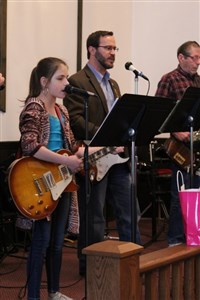 When Reagan Shick and her dad Brian sing and play guitar for the congregation during the contemporary praise service on Sundays at Paradise United Methodist Church in Mount Pleasant, it’s easy to see that musical talent runs in the family. For 10--year-old Reagan, however, there may be little nature and a lot of nurture in the mix. Brian and Cheryl Schick adopted Reagan from Kemerovo, Russia, in Siberia when she was 14 months old.

Reagan started playing guitar and taking lessons when she was just 6. After she expressed an interest in becoming a musician, Mr. Shick suggested she play with him in church in front of people. A lifelong member of Paradise church, he has been playing and singing in church most of his life. The praise group consists of two guitar players, a bass player, piano player, and someone who helps lead the worship.

According to Pastor Roger Howard, the congregation loves hearing Reagan perform. When she approached Howard in November and asked if she could be the lead person on Silent Night for the Christmas service, he was quick to agree.

“I think she is a wonderful girl with wonderful potential,” he said.” She’s very upbeat and loves doing it.”

Reagan wants to write her own songs and be able to perform them for people. She has used chord progressions that she is familiar with to dabble in song writing.

“Taylor Swift was a very big influence for her,” said Mrs. Shick, who also enjoys music and used to sing in the choir. “Seeing Taylor play the guitar really made her want to play.”

Reagan and her dad consider what they do a ministry.

“A lot of the church members have been very encouraging and have encouraged her to continue to play,” said Mrs. Shick.

The Shick family relocated to Greensburg about a year ago and getting to weekly music practice is a little harder now. As a result, they now participate in the music service twice a month.