Residents who were evacuated from their apartments when a pre-dawn fire broke out Dec. 16 in Parkview Towers, a senior high-rise in Munhall owned by United Methodist Church Union, began returning to their homes with the help of volunteers on Jan. 18.  Two residents died as a result of the fire, which broke out in a seventh-floor unit.

Richard Miller, 61, a former paramedic and volunteer firefighter died while trying to help his neighbors in the area where the fire started.  Elizabeth "Betty" Dell, 87, a lifelong member of the nearby Homestead Park UMC who lived in the unit, died on Jan. 6. She had been hospitalized since the fire. Mrs. Dell, who was active in many community organizations, had been the lead singer on a KDKA radio program in the 1930s and was a retired employee of the Steel Valley School District. Funeral services were held Jan. 11. See obituary

Mr. Miller had been a trained volunteer firefighter in Munhall and had worked many years as an EMT, according to family members. A funeral service was scheduled for Thursday, Dec. 22 at Messiah Lutheran Church in Munhall. See obituary.

Many of the 74 residents who were displaced by the fire went to stay with relatives until they can return to their homes. About 20 stayed in an area hotel or other alternative housing.

Rev. Larry Homitsky, president of Church Union, said new mattresses will be offered to all residents as they return because smoke permeated the building. Restoration and renovation will continue on the top two floors, but residents will be able to live in lower floor units.

Volunteers, many from area United Methodist congregations, helped residents pack clothing and belongings during the week between Christmas and New Year's. Some of those volunteers and others were helping them to move back in. More may be needed. To volunteer, contact Cheri Pogue or Rev. Beth Nelson at UM Church Union.

A fund was established by Church Union to help the residents. Online donations can be made at Parkview Towers' fundraising page on youcaring.com. Tax deductible donations also may be made through Church Union or any local United Methodist church. (See box below.)

Seven residents and three Munhall police officers suffered from smoke inhalation during the fire and were taken to area hospitals.  Watch KDKA-TV video report  Munhall Fire Chief Ed Pletsch told reporters that the three police officers were first to arrive on the scene and immediately went in to help residents.

“The first responders were phenomenal,” said the Rev. Larry Homitsky, president of UM Church Union. “Several of the residents use walkers or wheelchairs and they took great care while getting them out safely and quickly."

Nearby Messiah Evangelical Lutheran Church opened its doors and The Salvation Army and American Red Cross set up an emergency shelter for the residents, who had to leave the building in the frigid temperatures. By Friday evening, most residents were staying with family members. About 20 were settled into alternate housing, said Homitsky.

The fire was brought under control within a few hours, and the building was locked. For the next two days, staff escorted residents or family members individually to apartments to get clothes and other necessities Friday afternoon. 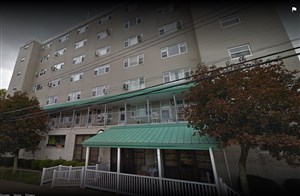 “We don’t know when the building will be open again. There is smoke and water damage in various places," said Homitsky. "We’re trying to get it open as soon as possible, but we are encouraging residents to stay with family members through Christmas."  On Monday, Dec. 19, the facility's director said work was underway in the building, but that some apartments may not be ready until March.

Chief Pletsch told the Pittsburgh Post-Gazette that in operating the high-rise, Church Union has a “pretty solid reputation ... They’re pretty fire safety-conscious.” In his more than 30 years with the department, there had been only minor calls to the complex, he told the newspaper. Read Post-Gazette story.