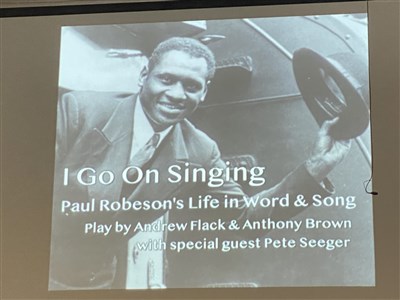 Nearly 80 people gathered at Dutilh UMC in Cranberry Twp. on Feb. 28 for I Go On Singing: Paul Robeson’s Life in His Words and Songs, a multimedia musical presentation written by Andrew Flack and performed by Anthony Brown. Brown’s rich baritone voice combined with piano accompaniment, narration, and photo/video archival footage made for an entertaining yet profoundly moving look at the life of singer, actor, and activist Paul Robeson. 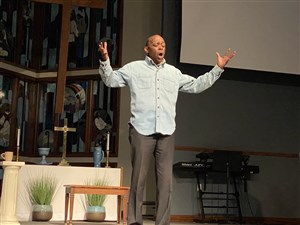 Anthony Brown is a Western Pennsylvania native and member of the ecumenical Wrestling with Racism group formed by members of Warren UMC and First Church UMC in Pittsburgh. For more than a decade, Brown has performed this show all over the world to promote peace and reconciliation through his music, but despite his Pittsburgh area roots, he had never been invited to perform the show in Western Pennsylvania.

This knowledge prompted the Pittsburgh District Antiracism Team to invite Brown to perform his show during Black History Month. Thanks to a generous donation from the Don, Sr. and Louise Blinn Family Trust, the team was able to sponsor the event.

“Pittsburgh ART strategically decided to use a variety of mediums this year to promote antiracist behaviors and assist in the charge to dismantle racism in our district and conference,” explained co-chair Jay Pendleton. “The team believed that I Go On Singing... would provide an out of the box experience that would both educate and entertain potential attendees.”

On his website, Anthony Brown explains his passion for telling Paul Robeson’s story.

"Paul Robeson has been an inspiration to me since my childhood years. Our home came alive with the sound of his recordings, and my parents would speak of this man in such glowing and heartfelt ways that conveyed their greatest admiration and deepest respect. When I was old enough to question things on my own, my opinion of him was only strengthened. Here was an African American man, "the tallest tree in the forest," who had not only the intellect and command of language, but also the courage to stand up and speak out for what he believed. He paid a dear price for his actions, but his courageous life would pave the way for the emergence of Dr. Martin Luther King, Jr., Rosa Parks, Nelson Mandela and many others. In fact, as I now travel the world singing and speaking out for peace and justice, I am reminded that Paul Robeson paved the way for me."

I Go On Singing follows the life of Paul Robeson from birth to death, not only highlighting his numerous achievements and capabilities but also his struggles. Despite his meteoric rise to fame, Robeson endured racist violence and government retribution in response to his activism.  Brown uniquely tells Robeson's story by pairing popular songs such as "Ol' Man River" and "Wade in the Water" with spoken narration, enriching historical fact with deep emotion.

Tracy Merrick, a member First UMC and the Pittsburgh District ART team, acted as narrator for this performance. “When I first read the script, many sections deeply touched my spirit and I realized how little I knew about Paul Robeson, about this ‘great and gentle warrior,’ about his incredible talents, about his focus for the full equality of all people, about his successes and about the troubles he encountered on his journey,” Merrick said.

Merrick describes himself as a social justice advocate for a number of causes and encourages others to find their voices and speak out against injustice. He is especially invested in fighting against racism and expressed hope that by “advocating for systemic changes, doors have been opened, or will be opened, so that more people will be fully included and fully affirmed in the church and in the world about us.” He said helping to share the story of Paul Robeson, “a man on whose shoulders many of us stand,” during this performance was humbling.

The Pittsburgh District Antiracism Team has planned a number of events and studies in the coming months.
News