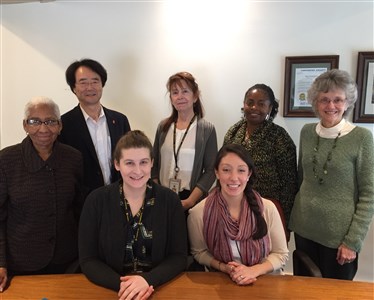 Bishops Cynthia Moore-Koikoi of the Pittsburgh Area, Jeremiah Park of the Harrisburg Area and Peggy Johnson of the Philadelphia Area, along with retired Bishop Violet Fisher, visited the Lancaster office of Church World Service, which serves areas in about 100-mile radius and is the largest CWS office in the country. It offers resettlement services to refugees, Cuban/Haitian entrants, those seeking asylum, and victims of human trafficking during the first three to six months after their arrival in Lancaster.

With the help of local churches and volunteers, CWS Lancaster welcomes about 400 individuals each year to central Pennsylvania and aims to help the new arrivals adjust, become successful members of their local neighborhoods. "Through hard work and a long-term commitment of support, people who once had no hope are discovering the means of transforming their lives," according to CWS.

Since 2013, Lancaster has taken in 1,300 refugees, 20 times more refugees per capita than the rest of the US, although the number of immigrants is greater in other larger cities.

President Trump announced on Jan. 27 that the U.S. government will stop resettling refugees from certain countries; pause the entire refugee resettlement program for 120 days; preference religious minorities; and reduce the number of refugees we welcome at the very time when they are most in need of safety.

The news reverberated through Erie, Lancaster and other Pennsylvania cities that are home to a large immigrant population. Listen to an NPR Marketplace podcast on the fears of some Erie residents. The Pennsylvania bishops and some of their colleagues visited a peaceful protest against the new immigration orders in Lancaster’s Penn Square, adjacent to the hotel where the church leaders were meeting.

“The trip to CWS was riveting,” said Johnson. “We talked to case workers who are working with immigrants who have been painfully impacted by this presidential executive order. Some have been waiting for as many as 17 years in a refugee camp. They are all ready to come here, but now some can never come. Families are forever separated. Some workers at the CWS office will likely experience layoffs. The stories are so very sad.”

In an action alert, CWS said:

"These announcements are gut-wrenching for our community members who are waiting to be reunited with a sister, brother, parent or child, and for refugees overseas with no other options for safety than to be resettled in the U.S. We cannot discriminate against refugees for how they pray or where they are from. Refugees are the most thoroughly vetted immigrants in the United States, undergoing biographic and biometric checks, medical screenings, forensic document testing, and in-person interviews. It is critical that President Trump and all Members of Congress hear their constituents decry these announcements and declare their support for refugees from all over the world."

In 2016, Pennsylvania resettled 3,219 refugees, the ninth-highest total for U.S. states. Typically, about one-fifth of Pennsylvania's annual refugee arrivals resettle in Erie County. In the City of Erie, about 20 percent of the 100,000 residents are immigrants, many of them refugees. Last year, the International Institute of Erie, the area's primary resettlement agency, welcomed 472 new arrivals, while Catholic Charities resettles about 250 each year.

"Many people arrive in Erie as immigrants, but they don't remain immigrants. Before too long they are Erie-ites and Americans just like the rest of us," REv. Jim Parkinson, pastor of First UMC in Erie, posted recently on Facebook. "I for one am proud to count many who were born in foreign lands as my neighbors and more importantly as my friends." He quoted Matthew 25:35 -- "I was a stranger and you invited me in."

Lancaster's long-standing open-door policy on immigration is controversial, according to a January 27 BBC News report.

To hear the stories of refugees who have settled in the Lancaster area, explore CWS Lancaster's Footsteps podcasts

Read a statement on welcoming refugees and immigrants from the NEJ College of Bishops.