Out of Adversity, Church Finds Hope 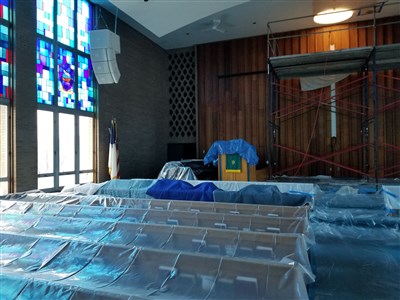 The people of Trinity United Methodist Church in Brackenridge are emerging from a cold winter of disruption, anxiety and adversity with renewed hope and energy.

Trouble started around mid-day on Sunday, Jan. 7, when the key drive pump impeller for the church's heating system failed dramatically, separating from its secure mountings and shaking the entire boiler system. As the temperature dropped, alarms went off. Texts were sent, and an emergency plumber was dispatched. Within 15 hours, a replacement pump was ordered, but instead of two days, it took two and half weeks for it to arrive and be installed. By then, heating pipes throughout the building, too numerous to count, had frozen and burst.


An insurance claim was filed. Repairs were started, then halted when asbestos was discovered in several ceilings. A ceiling leak appeared over the chancel in the sanctuary. The roof leak was repaired, but it became evident that much of the ceiling and the entire roof would have to be replaced quickly.

“Fortunately, two forced-air furnaces in the church social hall still worked and could be used to provide some heat for the building,” said the Rev. Greg Spencer. “We were able to hold worship in the social hall and continue our ministries and programs.

“Without hesitation or criticism, the congregation responded to the adversity. Attendance in worship remained the same. Participation in community group activities and service has continued undeterred,” he added.

Group meeting and Bible studies had to adjust and do things differently, but they continue.  As a result, the pastor said, the congregation has discovered that “it is not what you see, but how you see it, that counts.

“Repairs have propelled reconsideration of ministry and room use. Fellowship is warmer and the congregation has become closer as they face the needs together,” he explained. “It is possible that re-vitalization and renewal is happening, and a brighter future is emerging, thanks to a broken pump, and a faithful congregation,” Spencer said.

“Repair will ensure decades of ministry and stability in the building, and the community is drawing together to meet needs in a new spirit of cooperation, shared vision, and common hope," the pastor said.

Other churches and community groups have supported the congregation throughout its ordeal.

For example, when a performance by the Christian band “Risen to Save” at the church had to be cancelled, the band offered to play a benefit concert with proceeds to support the repairs. Nearby Grace United Methodist Church in Natrona Heights offered their sanctuary and social hall for the benefit concert and a reception to meet and greet the band following the performance.

“God’s light shines through, in spite of darkness and cold,” Spencer said. “The warmth of the spirit is so much more significant, than even the cold of winter.”

The benefit concert by “Risen to Save”, is scheduled for 7 p.m., Saturday, April 28, at Grace UMC, Natrona Heights. It is free of charge, but an offering for the Brackenridge church will be received.
Donations also may be mailed to Trinity UMC – Brackenridge, 847 Tenth Ave. Brackenridge, PA 15014.
A “Go Fund Me” account is being set up for online donations.
News