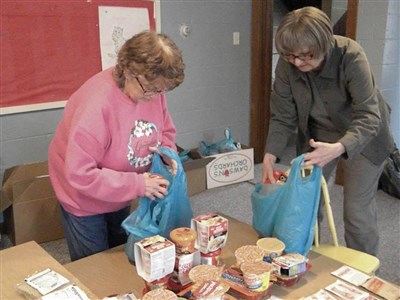 The folks at California United Methodist Church want to change the world. One way they’re doing it is by filling backpacks with food for kids who may go hungry on the weekends. They’ve taken their efforts online with a Gofundme campaign to raise money to buy the food for the backpacks.

The church’s weekend feeding program feeds local elementary school students in Kindergarten through 4th grade who don’t have access to regular meals outside of school hours. The idea was inspired by a group Bible study.

“We were in the middle of a Bible study called Change the World by Michael Slaughter,” said Rev. BT (William) Gilligan, pastor at California UMC.

Motivated to do something that would make a difference close to home, the group did some research on hunger and learned that for a certain percentage of students, school meals are sometimes the only meals they eat and many go hungry over the weekends when school is not in session. “In that discussion in our Bible study group, the church really felt that this was a way to get involved and solve that problem,” Gilligan said.

Each week 8 to 10 volunteers from the church pack 108 bags filled with oatmeal, cereal, macaroni and cheese, ravioli and other items that can be prepared easily using just a microwave oven.

“We try to make it as healthy as we can, but also include things that could be prepared by someone who is in Kindergarten so that they could cook it in a microwave so that they don’t have to use the stove,” the pastor explained.

The program is not budgeted through the church, necessitating other sources of funding. They include  including weekly offerings and the Gofundme campaign to solicit donations from the public. The online fundraising efforts have raised just over $4000 since July 2015 and account for the majority of the program’s funding.

In addition to helping feed local kids, the program has also introduced new partnerships between the church and other churches, businesses and the local ministerium. Through a partnership with California University of Pennsylvania, each week about three fraternity and sorority volunteers help pack the bags and, in return, receive credit for their time.

When the program began in December 2014, it initially provided backpacks only to children in Kindergarten and first grade. It expanded to include second-grade students in March 2015, and grew again at the beginning of the current school year to include grades three and four. The ultimate goal is to expand to 8th grade.

“We will not be able to expand to 8th grade if we don’t get more donations,” said Gilligan.

To donate to the church’s weekend feeding program, visit their gofundme page at gofundme.com/weekendfeed.