A Day of Truth and Repentance

In 2016, the General Conference of The United Methodist Church approved a resolution that affirms the sacredness of American Indian people, their languages, cultures, and gifts to the church and the world.

The Boarding School Healing Project, a national coalition of organizations working with Native communities, raises awareness of and advocates for Native American children who had been forced into boarding schools, where native children were taught to disown their cultures and languages. The project has designated Sept. 30 as a Day of Remembrance.

The Justice for Our Children: Healing for Our Communities group, which includes some NEJ Committees on Native American Ministries, has set October 6 as a date for A Day of Truth and Repentance for Our Children. On that day in 1879, Gen. Richard Pratt forcibly removed First-Nations children from their homes and placed them in the Carlisle (Pennsylvania) Indian Industrial School, which he founded.

This year, the Church is called to observe a day of Truth and Repentance for Our Children. There are concrete acts we can take as followers of Christ to begin a process a healing.

Justice for Our Children; Healing for Our Communities calls us to: 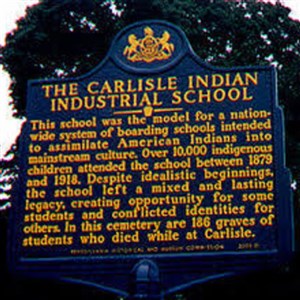 The Carlisle Indian Industrial School aimed to integrate Native Americans into the white culture, using physical and emotional violence. Pratt was infamous for his motto, “Kill the Indian, save the man.” He also spuriously asserted, “Transfer the savage-born infant to the surroundings of civilization, and he will grow to possess a civilized language and habit.”

The sad and sinful truth of this reality is that this process tried to eradicate the very essence of a people who appeared to be different than those whose ancestors came from other continents. The North American First Nations had journeyed freely and understood the land that they had been part of for millennia. But in the 19th century United States, the dominant culture believed that difference was not to be celebrated but rather to be stamped out.

Thus, the goal of the boarding schools was to eradicate the heritage, belief, and customs of Native Americans by indoctrinating their children and youth against it. Life in the Carlisle Indian School Project was not only hard, but for many, it was deadly. Disease and harsh conditions took their toll. Hundreds of children died. Remains of many of these children are still on the grounds where the school once stood. The names of many of them are known to only God, because their original names and tribal identities were stripped from them in favor of English names assigned by the school. They were buried away from their land, their families, and their ancestors. Today, thankfully, there is ongoing work to return those children to the land of their tribes and families.

We in the United Methodist Church stand together, hand in hand, embracing cultural diversity and celebrating the many heritages that make up our church. Together we need to continue to confront the insidious sin of racism and to find pathways to ensure that our children, their children, and the children yet to be born will find joy and honor to celebrate who they are and from whom and where they have come.

We encourage all congregations to observe a day of remembrance and action.