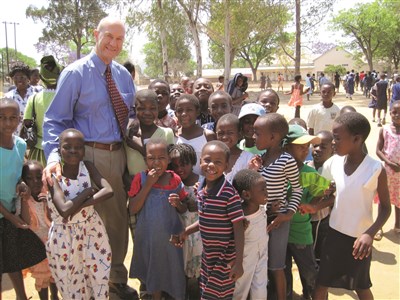 Drew Harvey, long-time leader of The Nyadire Connection, with children at the mission after a church service.
8/17/2016

The Nyadire Connection (TNC) will celebrate its 10-year relationship with the United Methodist Mission in Nyadire, Zimbabwe on Friday, Sept. 16,  with a dinner at Christ United Methodist Church (CUMC) Bethel Park.

TNC is an all-volunteer, faith-based, not-for-profit organization whose mission is to support and sustain the programs and the people of Nyadire.

The relationship began in August, 2006 when Christ Church commissioned an 18-member mission team to help revitalize the once effective Nyadire UM Hospital.  During their two-week stay, the team found a joyful, resilient, and capable people persevering despite difficult circumstances in their country. Besides a hospital with non-or-partially functioning equipment and empty pharmacy shelves, other needs at the mission were brought to their attention, including an orphanage in need of help.

Upon their return to the U.S., the team sought a more permanent relationship with the mission – one based on those at Nyadire identifying their needs.  The Nyadire Connection was launched and sought other churches and partnerships to help with the challenges.

Fourteen programs, as well as partnerships with organizations and businesses, have evolved since 2006.

Brothers Brother Foundation, Global Links, Chosen, and Allegheny Health System have contributed needed hospital equipment and supplies.  Pharmacy shelves are now stocked. The United Methodist Committee on Relief (UMCOR) worked with TNC and the mission to once again bring clean running water to Nyadire.  A credentialed administrator was hired to supervise the children and staff of the Home of Hope Orphanage.  Sponsorships were created to provide care for the 20 + children there.  Additionally, sponsorships for rural orphans pay school fees and provide school supplies in backpacks, allowing 400 to attend school each year.

A microloan program, pastor partnerships, distribution of seeds, farm assistance, and, more recently the renovation of six remote rural clinics have been undertaken. These clinics provide basic health care for thousands who walk miles for treatment of malaria, HIV, and other diseases, as well as a safe and clean place to deliver babies.  To date, two clinics have been renovated to a standard of care, one is in the process, and three are waiting.  Anxious villagers have already made the necessary bricks.  Renovation of one of the clinics was funded in part by the efforts of two United Methodist college students who raised $40,000.

Again responding to a recently revealed need – girls not being able to go to school during their monthly period for lack of adequate protection -- the Girl Empowerment Pad (GEP) program has begun providing materials and sewing machines to schools where girls can learn to make their own reusable washable pads.

Exciting as the 10 years have been in growing together, The Nyadire Connection looks forward to new challenges.  Good works with good people.