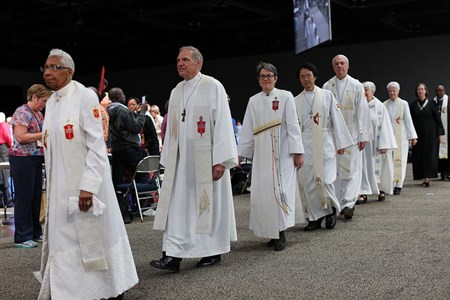 In procession at General Conference 2016 are, from left, NEJ Bishops Violet Fisher (retired) and John Schol of Greater New Jersey; Sally Dyck of the Chicago Area; Jeremiah Park of the Harrisburg Area and Thomas J. Bickerton of the Pittsburgh Area. (UMNS photo)
5/25/2016

A proposed reduction in the number of bishops for the Northeastern Jurisdiction of the United Methodist Church has been put on hold until 2020 by action of the General Conference.  As a result, delegates to the NEJ Conference, meeting in Lancaster, PA from July 11-15 are expected to elect two new bishops – one to replace Bishop Marcus Matthews, who is retiring, and the other to replace the late Bishop Martin McLee.

The UMC Council on Finance and Administration last year determined that membership numbers did not support retaining nine episcopal areas in the Northeast, so the number of bishops should be reduced to eight. However, the 2016 General Conference approved a petition that keeps all U.S. jurisdictions at their current number of resident bishops and calls for a study during the next four years. 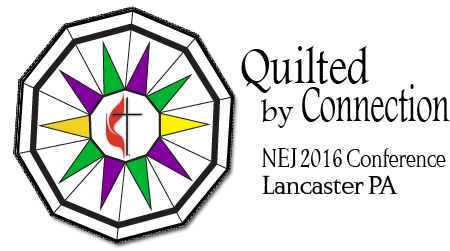 In addition, the Council of Bishops, in consultation with the Inter-Jurisdictional Committee on the Episcopacy, has been asked to appoint a Jurisdictional Study Committee to examine the best number and boundaries of jurisdictions and episcopal areas in the United States and report to the 2020 General Conference.

Approved by a 254-29 vote, the approved petition read:

The Council of Bishops in consultation with Inter-Jurisdictional Committee on the Episcopacy shall appoint a Jurisdictional Study Committee to examine the best number and boundaries of jurisdictions and episcopal areas in the United States. The committee will use the 2017-2020 quadrennium to create and present a detailed report on missional priority and strategy to the 2020 General Conference. This report is to include but not be limited to the analysis of: historical perspectives, current reality, demographic changing trends, emerging missional reasons/values, financial implications, changes to the jurisdictional conferences' and episcopal area boundaries, the number of jurisdictions in the U.S., and additional data as appropriate. The report will include specific recommendations and a strategic implementation plan.

The voting membership of the committee shall be composed as follows: