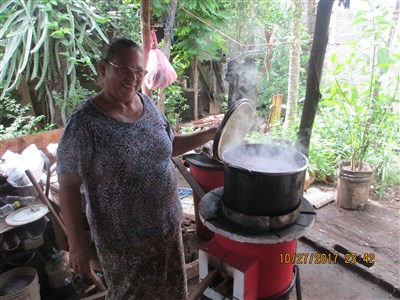 As a joint Western PA-East German Partnership mission team heads to Nicaragua to do a reforestation project, the Western PA - Nicaragua partnership has launced a new project that will ease some conditions that cause deforestation.

The Nicaragua partnership will distribute high efficiency  wood-burning cooking stoves in Nicaragua.  The "rocket" stoves use less than half the amount of wood required for an open fire and create less than 10 percent of the smoke.  They are also cool to the touch to reduce burn injuries.

The partnership purchases the stoves from a locally owned and operated factory in Esteli', Nicaragua, that was set up by Stove Team International, a group from Oregon.

They’re working with the Nicaragua Methodist Church, TMS-Global (formerly The Mission Society), and other NGOs to distribute the stoves to local community-based coops who collect the nominal monthly payments ($2-$3 per month) for each stove.  The payments are then used to buy additional stoves for the community.

The stoves reduce the time spent collecting firewood by 10 hours per week and help to reduce deforestation.

If you or your group would like to purchase a stove for a family in Nicaragua, you can send $80 to the Nicaragua Task Force advance special number 001182-4002.  For more information, contact Richard Schall at rschall.mschall@gmail,com.

See a National Geographic article on use of the stoves in Guatemala.