Martin Luther King Jr. weekend -- Jan. 16-18, 2021 -- has been a time to celebrate Dr. King’s life and remember how his work in the Civil Rights Movement prepared the foundation for dismantling racism. This year, due to the coronavirus pandemic and other reasons, observances were very different.

In Western Pennsylvania, Rev. Debra Mason, WPAUMC coordinator of diversity development and inclusion, preached during a virtual service that premiered at 4 p.m., Sunday, Jan. 17.  Produced by the Greensburg District Antiracism Team, it is an adaption of the annual service launched several years ago by the District in partnership with the Pittsburgh District.

Indiana Grace UMC, which normally hosts the Indiana County NAACP's annual Dr. Martin Luther King Jr. Celebration Program and Fellowship Luncheon, participated in a virtual event on Saturday, Jan. 16 from 11 a.m. to 1 p.m. on Zoom. Grace Church is also supporting a Community Blood Drive by the American Red Cross at Indiana Mall on Monday, as part of the MLK Day of Service.

In Pittsburgh's North Hills, United Methodists have participated in an annual Martin Luther King, Jr. Unity Breakfast, sponsored by several civic and religious organizations for the past 20 years. This year’s event, scheduled for Monday, January 18 from 9 - 10 a.m., was via Zoom. The theme was “Social Activism Past and Present.”  It is free and open to the public.  More information is available in this flyer. Online registration (via AARP PA) is required. To register, click here.
The United Methodist Church Union, whose members include churches throughout Allegheny County, invited individuals and congregations to join in 28 Days of Caring, active love and support for the Warren United Methodist Church from Martin Luther King's Birthday until Valentines Day.

"The historical black church in the Hill District is a beacon of hope in an ever-changing community.  Their heritage is rich, their future is bright.  They need the love and support of the Pittsburgh District right now," said Church Union's announcement of the effort. Ways to participate include works days at the Warren church, daily prayer, financial donations, learning the history of the Warren church, and participating in an anti-racism study.
In Johnstown, the NAACP Martin Luther King Jr.’s Celebration of Peace and Unity in the Community was hosted by the Johnstown Branch via Zoom.

In Erie, James Sherrod, executive director of the Martin Luther King Jr. Memorial Center, announced that its annual march, program and dinner will be virtual.

"In good conscience, we could not go against what we've been telling the community since this pandemic started, that we need to social distance, wear masks, wash our hands, gather only with people we live with, and follow Pennsylvania Department of Health and Erie County Health Department regulations and recommendations going forward," he told the Erie Times News.

The King Center is a leader in a health disparities equity initiative to educate the public, particularly minorities hit hard by the virus, about precautions needed to stay safe.

Dr. King gave his life to the cause of civil rights from the mid-1950s to 1968, when he was assassinated in Memphis, Tennessee. He led the Southern Christian Leadership Conference with the goal of desegregating society. Dr. King’s speeches and writings decry racism. While some progress had been made, there is a widening disconnect between Dr. King’s call for racial justice and actions across this country, including in Western Pennsylvania churches and communities. Not only is implicit bias -- unconscious racism -- a reality, but symbols of white supremacy have become more prevalent in public events over the past several years, including at the Jan. 6 insurrection at the U.S. Capitol.

Christian leaders across the theological spectrum decried the display of Christian symbols and banners. Many also pointed to the Confederate flag, a gallows that was constructed and racist signs and language used by members of the mostly white mob as evidence of the racism propelling many of the rioters.

Bishop Cynthia Fierro Harvey, president of the United Methodist Council of Bishops, pointed out  that Martin Luther King Day and the Inauguration Day following it offer some much-needed opportunities for reflection and rededication. In A Call to Action for The United Methodist Church in Times of Challenge, she and her fellow bishops invited United Methodists to take seriously the call to follow Jesus during these challenging times.

The interim executive of the denomination's Commission on Religion and Race, offered some tips for white Christians to begin working against racism. See what they are here.

In United Methodist churches, Sunday, Jan. 17 is also Human Relations Sunday, a day that calls all our churches to participate in helping all God’s children to realize their potential. Many congregations receive special offerings to fund ministries that nurture at-risk youth, strengthen communities’ self-improvement efforts and advocate for the oppressed. 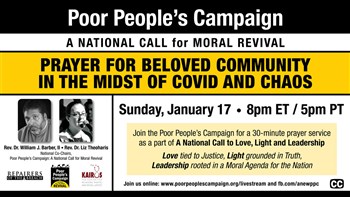 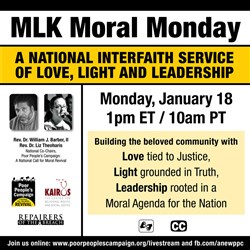