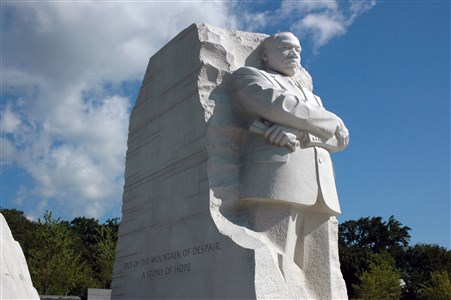 Several United Methodist churches in Western PA planned to host services celebrating the life and legacy of the Rev. Dr. Martin Luther King Jr. on the weekend of the national holiday honoring him.

Pastor Raphael Koikoi, who serves as the Upper Allegheny Valley Director of Ministry and Community Development, will be the speaker at a 4 p.m., service on Sunday, Jan. 20 at First United Methodist Church in McKeesport. It is sponsored by the Pittsburgh and Greensburg districts. The offering received will support the MLK Jr. Memorial Scholarship established by the two districts several years ago to assist seminary students who have been called and responded in active ways to put an end to racism. There will be a time of fellowship following the service offered by the six McKeesport UMCs and their shared ministry.

In Ellwood City, the First United Methodist Church was scheduled to host a celebration called Strength to Love at 4 p.m. Sunday, Jan. 20 dedicated to Dr. King and aimed at diffusing social tensions and overcoming social injustice.
Because of expected inclement weather, the service was cancelled and will be rescheduled.

Because of the incoming storm and the dangerous travel conditions that are being forecast for the weekend, the Ellwood City Ministerium and the leadership team of the Butler District have reluctantly made the decision to cancel tomorrow's district-wide service of worship honoring the legacy of Rev. Dr. Martin Luther King Jr. The service was to have been held at First UMC in Ellwood City on Sunday afternoon at 4:00. Many of the scheduled participants have expressed significant concern about travel, and our leadership felt that it was best to honor those concerns, especially since we want everyone across the district to have the opportunity to attend this important service of worship.

We will reschedule the service in February.

“We are truly blessed by everyone giving so generously of their time,” said the Rev. Angelique Bradford, pastor of Ellwood City First.

Ken Turner, a member of the Pennsylvania Historical and Museum Commission and Ellwood City resident, will will discuss the history of African Americans in Ellwood City and surrounding areas during a light dinner following the service. His talk, “The Underground Railroad and the African American Experience in Pennsylvania,” will focus on townspeople and clergy who at great risk hid slaves and helped them escape to freedom.

“It is all about equality and our struggle as Americans and especially Pennsylvanians to work together. We are one people under God. We must share our world and not let differences divide us,” he said.

“We are the host church, but without the work and support of all these men and women this service would not have been possible,” Bradford said.

The annual service was started in 2015 by the former Ellwood City First pastor Pat Cleary and the Rev. Wayne Cleary of Unified United Methodist of Beaver Falls because they saw the need in the community.

In Johnstown, Grove Ave. United Methodist Church will host the 34th annual Dr. Martin Luther King Jr. Celebration of Peace and Unity in the Community sponsored by the NAACP Johnstown Branch.It's at 4 p.m. on Monday, Jan. 21.

Keynote speaker Chris Moore of KDKA Radio will reflect on Dr King’s peaceful movement seeking equal rights for all and howDr. King's principles intersect with efforts to elimination violence in Johnstown neighborhoods. Music will be by the Community Choir directed by Devon Haselrig. All are welcome for the program and the 6 p.m. reception.