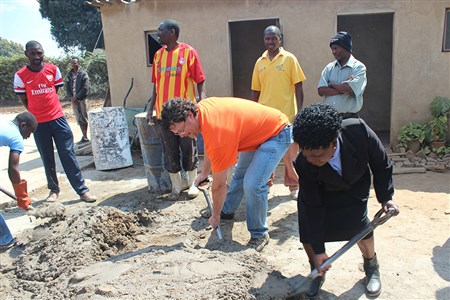 This year marks the 6-year anniversary of the Chabadza Partnership between the Western Pennsylvania Conference (WPAUMC) and the Zimbabwe Episcopal Area (ZEA).

Chabadza is a Shona word that describes a community spirit of helping someone you know who is already at work. The partnership was formed around the denomination's Four Areas of Focus and includes district-to-district relationships focused on creating new places for new people, usually in new and existing congregations.  As we reach this milestone -- our Ebenezer -- let’s celebrate the partnership and all our accomplishments as we continue to further God’s Kingdom.

Then Samuel took a stone and set it up between Mizpah and Shen. He named it Ebenezer, saying, "Thus far the LORD has helped us." This year is 6 years of our partnership and it is our Ebenezer.  -- 1 Samuel 7:12


An Ebenezer is a marker-point that shows us where we are and gives us an opportunity to look back at where we started. It comes from 1 Samuel 7: 12.

Mini-Ebenezers have been planned through Western Pennsylvania in March and April to celebrate the partnership.
The mini-Ebenezers will be a time of revival and celebration through singing and dancing, hearing about the district projects and stories from people who have been to Zimbabwe. Dates and locations for the mini-Ebenezers are:
News