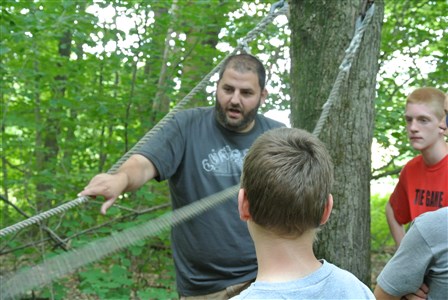 Shane Hinderliter, a Western PA native currently serving as director of student ministries at a large-membership church in Houston, Texas, will be the new Conference Coordinator of Camping and Retreat Ministries, effective March 1.  He follows Jessica Gamache, who left the camping coordinator position Nov. 4 to become executive director of the United Methodist Camp and Retreat Ministries Association.

“I am excited to come home,” Shane said. “The camps have always been home to me.”  He was a counselor-in-training as a young adult at Camp Allegheny and served on summer staff at Wesley Woods through his years at Asbury College. Even while working in youth and young adult ministry in two other United Methodist Conferences, Shane returned to Wesley Woods each summer to dean the Senior High Sports Camp.

"I have known Shane since he was a teenager and president of the Butler District youth council," said the Rev. Alyce Weaver Dunn, Conference Director of Connectional Ministries in an email to the camp and retreat ministry directors.
"(Rev.) Keith (Dunn) and I were advisors to the group. Even at that young age Shane was a self-starter and a leader!"

Shane grew up in Cabot United Methodist Church and served in youth ministry there and at Ingomar United Methodist Church before moving in 2007 to the Peninsula-Delaware Conference as Director of Young People’s Ministries. He was elected as a 2012 Northeastern Jurisdictional Conference delegate from Peninsula-Delaware and represented the NEJ on the General Board of Discipleship’s Division on Ministries with Young People. Through a staff exchange during that time, he led summer camp counselor training at Wesley Woods each year.

Moving in July 2013 to the Great Plains Conference, Shane served as coordinator of Local Church Youth Ministry and worked closely with the  the camping ministry coordinator, assisting with camp staff selection, training, programming and promotion. He served as staff leader at Camp Norwesca during a leadership transition in the summer of 2015.  He also served on the transition team for another Great Plains camp.

In August, 2018, Shane accepted his current position at St. Martin’s Episcopal Church in Houston. Both he and his wife Amy, however, are glad to be coming home to Western Pennsylvania. Amy grew up in Dravosburg before her family moved to the Tionesta Area.

The couple first met at Wesley Woods. They  started dating many years later after he moved to Delaware and she was living in Virginia. They were married at Wesley Woods. Both look forward to being closer to family as they raise their two children - Hannah, 8, and Maxwell, 2.

“I am excited to meet the directors at Allegheny and Jumonville and Olmsted Manor -- and especially to get to know the people involved with the two newer camping ministries (Healthy Village Learning Institute and At the Lake Ministries). Seeing those ministries is going to be a real learning experience!”
News