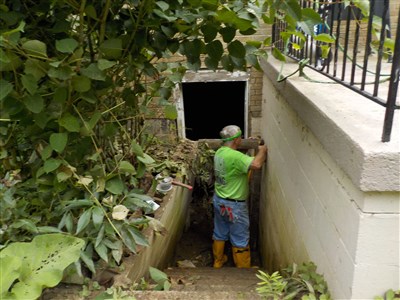 The Western PA Disaster Response Ministries Team has been lending assistance on a case by case basis in areas affected by flash flooding and tornado activity this summer.

Pastor Calvin Cook of First UMC in Kane served as Conference Coordinator for many years and stepped down June 30. “I will remain as Chairperson of the Western PA Region Volunteers Organizations Active in Disaster (VOAD) and will also sit on the State VOAD board, Cook said in an email to Disaster Response volunteers and leaders.  “My heart has been and will be to offer a caring Christ-filled presence to those affected by disaster knowing that disaster comes in many forms.

“I am very confident in David’s compassionate Christ-honoring leadership and faithfulness and that he has been fully endorsed through the election process at Annual Conference,” he added.

Cook offered thanks to all who support Disaster Response Ministry and to his wife Gail and the churches he has served, “who have been more than patient when responding to disaster took priority. I will continue to support this ministry and UMCOR and look forward to continued collaboration when it comes to sharing the love of Jesus Christ with all people, in all places, and at all times,” he said.

Kissinger said it is a blessing and honor for him to serve as the Conference Disaster Response Coordinator. “I have worked closely with Calvin for years and have learned so many things from him as he ministered to the survivors and led our Disaster Team,” he said. “It is my prayer to be a good and faithful servant on this spiritual journey and that I will guide our team as we go out of the Church showing the people in the Western Pennsylvania Conference a caring Christian presence in the aftermath of a disaster.