Join March to Unite in Pittsburgh 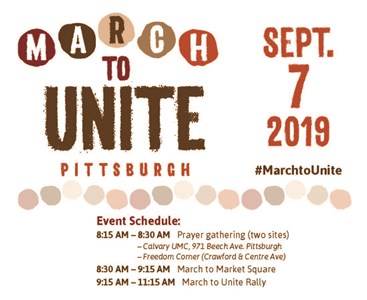 United Methodists are invited to join with people from other religious, social and civic groups in a March to Unite on Saturday morning Sept. 7 in Pittsburgh. The event is described as a call for a public witness of unity across racial, social, religious, political and other lines that are dividing communities.

Participants are invited to gather at one of two locations -- Calvary UMC at 971 Beech Ave. on the North Side of Pittsburgh or Freedom Corner at Crawford and Centre Ave. in the Hill District -- at 8:15 a.m.for prayer, followed by a symbolic march (on sidewalks) across bridges to Market Square to hear speakers and enjoy entertainment. The Market Square event will run from about 9:15 a.m. to 11:15 a.m.

KDKA reporter Lynne Hayes Freeland, a member of Warren UMC, is scheduled to serve as the emcee for the event and Pittsburgh Police will provide escorts at designated areas.

Those who plan to attend may reserve a T-shirt ($10) by contacting Rev. Hand at 412-281-7152 or emailing her with name and size needed at Pittsburgh.DS@wpaumc.org.