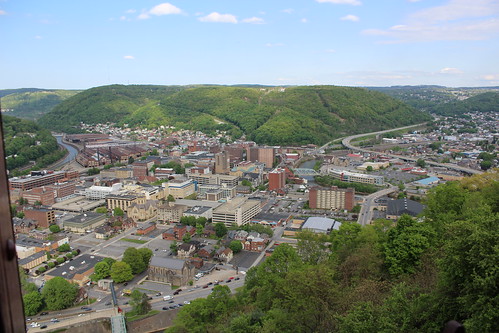 “By Water and Spirit” was the theme of the 2019 spring gathering of the Northeastern Jurisdiction Commission on Archives and History, which drew about 55 laity and clergy to the Johnstown District in early May. The event was hosted by the Western PA Archives and History Commission, chaired by the Rev. Ed Herald.  A tour of the area's historic sites was a highlight for participants. (To see photos and learn more about the sites, click on the photo below and look through the event booklet.)


Johnstown has suffered three major floods – in 1889, 1936, and 1977. When the flood waters tore into the city in 1889, it was the Franklin Street Methodist Episcopal Church building itself that forced the waters to divide, saving many of the buildings in Downtown Johnstown. And the Spirit, working through the people and the churches of Johnstown, brought the town back to life after each tragedy. Revivals led by Billy Sunday in the early 1900s brought about a resurgence of the Spirit, with new churches built and existing churches expanded as membership grew.

In her message during the closing worship, the Rev. Alyce Weaver Dunn, who served as Johnstown District Superintendent from 2010-2018, noted that there had been many more than three floods in the area's history. "No matter how insignificant a flood may be deemed, whether the flood makes the history books or not, when property is damaged and lives are lost, people are affected, physically, emotionally and spiritually," she said. "Floods leave a scar on the soul of a community.

"Time and time again during my service here in Johnstown, I heard personal testimonies from survivors of the 1977 flood – people can remember where they were and what they were doing in those frightening days.  Many of our United Methodist churches can show you the watermark in their basements from the floodwaters; the Scalp Level church was even destroyed and eventually relocated high up on a nearby hill.  It’s no wonder that Johnstown calls itself “Flood City,” embracing its history, but also making a statement that though there are scars, life continues, and there is even hope for the future."

Using scripture from John 1:14-17, she focused particularly on John's powerful reference in verse 16 to us receiving "grace upon grace." The fullness of Jesus, she said, "is a flood of grace, not destructive like water, but life-giving." Rev. Dunn pointed to United Methodist Human Services as on sign of the transforming flood of grace in the Johnstown area.  The mission agency "began in 1977 as a flood relief agency, responding to the immediate needs of that disaster. The agency still exists today, offering vital ministry and resources to persons in this region who are underserved."

Johnstown is also the home of the only United Methodist Historic Landmark in the Western Pennsylvania Conference -- Johnstown: First United Methodist Church, where the the Evangelical Association and the United Brethren denomination merged in November, 1946 to form the Evangelical United Brethren Church. The church hosted the Wednesday evening session of the NEJ gathering.

Noting the divisions threatening to divide the denomination today, Rev. Dunn offered thanks that God's flood of grace through Jesus Christ continues to be poured out in abundance. "The grace upon grace of Jesus Christ does not stop because we are trying to figure out how we are to live out our faith in this moment," she said.

"No matter what happens in our denomination in the future," she added, "my prayer is that the foundation of our history will be the grace upon grace of our Lord, that we will find ways together to bring life and hope and healing, not destruction and despair."
News